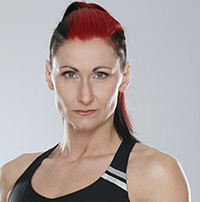 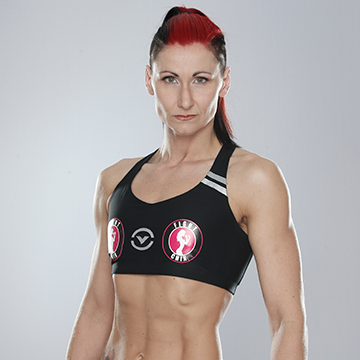 Charmaine Tweet is arguably one of the most popular female featherweight fighters. Holding a decorated record of 9-5 with victories over some of the best female featherweights like Latoya Walker, Anna Barone and Amanda Bell, Charmaine has made quite an impressive resume. I had the opportunity recently to have a conversation with her.

Not many know that even before getting into MMA Charmaine was into combat sports. She started her career as a kickboxer and amassed a record of 10-1-1. Asked how she got into combat sports, Charmaine said, “I was 14-years-old when I tried my hands on a kickboxing class, I thought it was fun and hence decided to give the sport a try.”

Women’s MMA wasn’t a limelight sport back when Charmaine started it. It was growing but was not a main stream attraction. I asked Charmaine how did she get into MMA, “I once went to a WEC event, I enjoyed it thoroughly. Then one of my friends suggested that I should give MMA a try, for making some money.”

With Cris making her UFC debut fans have demanded that UFC create a female 145 division, and the way things are turning UFC might soon create one. I asked Tweet her views on the current scenario of the female featherweight division and UFC. “Yes it’s time to create a female featherweight division,” she said. “Cris is arguably the best female fighter on the planet and she can get views to the UFC. And personally, I too want to fight in the UFC. I love Invicta FC but UFC is a bigger stage, this gives us featherweights an opportunity to showcase our talent to more people.”

Many people have expressed that the featherweight division lacks both fighters and talent. Tweet stands as a perfect counter to this statement as she has faced some of the best female fighters on the planet like Ronda Rousey and Cris Cyborg. She has time and again delivered quality performances and this does prove that 145 has talent. She spoke about this perception of lack of depth at featherweight. “Female featherweight division has many fighters,” Tweet stated. “Most of the girls fighting in the UFC bantamweight division, including Ronda Rousey, earlier fought in the female featherweight division. These girls just go through brutal weight cuts so that they can compete in the UFC, whereas there are some like me who just cannot make it to 135. UFC needs to create this division so that it becomes easier for fighters to manage weight and not harm their body while at it.”

When questioned about why she thinks there is this false perception, Charmaine literally started laughing, she then said, “They are absolutely wrong. Just because we have one very dominant fighter in the division it doesn’t mean we all are useless. We all are just being outshined by Cris. We featherweight fighters are like the heavyweights of women’s MMA, we come with unpredictable knockout power and our matches rarely go to the judges. UFC definitely needs to have a featherweight division.”

Cris Cyborg apart from being one of the most dominating female fighters on the planet is also the current Invicta FC featherweight champion. Since making her UFC debut Cris hasn’t defended her belt. Being a featherweight fighter, Tweet had quite a few words on the situation. “Invicta FC has been very good to all its athletes. They treat everyone well, but it does seem unfair that Cris can go to UFC without defending her belt,” she explained. “When the 115-pound fighters left for UFC, the champion had to give up the belt. If Cris is not keen on defending the belt anytime soon she should vacate the belt.”

Charmaine inaugurated the women’s lightweight division in Invicta FC by squaring off against Veronica Rothenhausler, and she won the fight via knockout. The creation of heavier divisions for women has always been a topic of heated debates. Tweet expressed her views on it, “I would be glad if we had a women’s lightweight division. I walk around at 165, cutting down to 145 drains me a lot. I hope Invicta FC soon creates one.”

Tweet’s last fight came in May where she knocked out Latoya Walker in the very first round, and since then she has had no fight announced. “I guess I will be fighting in 2017 next,” she said. “If something unexpected does not come up.”

Tweet is riding a three-fight win streak, and her last defeat came at the hands of Cris Cyborg. I asked her if she had any plan on facing Cris for a rematch. “I do not know what is going around Cris Cyborg right now, so I don’t know whether I will be given an opportunity to face her,” Tweet stated. “Yes, I do want to face Cyborg again. My performance against her was not great and most of the girls would avoid her because of worrying about losing. But I have no problem in facing her.”

The position of women has been a topic of debate for a long time. There have been countless incidents where women athletes have complained about low pay and bad treatment when compared to the male counterparts. Being a veteran and as someone who has competed across many countries I asked Tweet her thoughts on the situation and whether there was any reality to these claims. “In regional events I am paid a lot better than some of my male counterparts,” she explained. “Though, if you look at the UFC, you can see that women athletes are not paid as much as the men. Amanda and Miesha main evented UFC 200, many fighters earned in millions whereas they both were paid half of that. How is this fair? They definitely deserved more.”

Charmaine is known to many by her nickname “Not So Sweet”. I asked her the story behind it. “There is no story behind the nickname. One day we had just completed our training and were sitting tossing around nicknames and this one just stuck around,” she said.

Tweet has had a glorious kickboxing and MMA career but now that she is 39, she clearly is approaching towards the end of her career. I asked her thoughts on retirement. “I have no plans right now on retirement,” Tweet said. “Maybe a couple of more years. I will fight as long as my body allows me to fight. Before my retirement I want to fight in the UFC.”

Most MMA fighters don’t earn a ton of money from fighting but do it for the love of the sport. Most of them work to pay bills, and Tweet comes under this category as well. “I have recently left my earlier job,” she stated. “I work with a bank as a financial consultant.”

I asked her to rank the current five best female featherweight fighters. Tweet responded, “I have not been watching many girls compete lately. But if I had to I would say Cris Cyborg, that goes without saying, Marloes Coenen, Julia Budd and me. For the fifth person I would have said Megan Anderson but I don’t think that she has faced top competition lately, so top four for now.”

I ask her to leave a message for people who want to take MMA as a career. And as a financial consultant during the day, she gave the most appropriate answer, “Have a backup plan. MMA doesn’t pay all bills, so have another job. Treat your body right. Avoid minor injuries.”