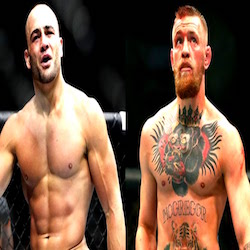 UFC featherweight champ Conor McGregor is moving up to 155-pounds to challenge Eddie Alvarez for his lightweight title in the UFC 205 headliner on Nov. 12 at Madison Square Garden in NYC. The world’s most famous trash-talker joined Alvarez on a media conference call today and did not disappoint. He claims this will be Eddie’s last fight and he will retire him. The fight starts as soon as the bout is announced and Conor is a master of mental warfare. Listen in as the Irish superstar does his thing and then decide for yourself if he can actually become the UFC’s first two-division champ in less than two weeks.