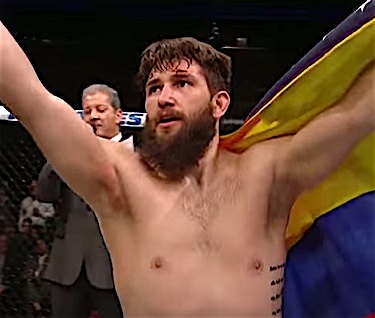 At UFC on FOX 18 the night had turned out to be very entertaining so far. The prelims had seen some really good performances and kicking off the main card was hot prospect Sage Northcutt taking on the virtually unknown lightweight Bryan Barberena.

Bryan had taken the fight on eight-days notice as Andrew Holbrook had withdrawn from the fight and hence the fight was being contested at 170 pounds. People were doubting the matchup as everyone was absolutely sure that this was another scripted saga made by the UFC to make Sage Northcutt look like the knight in shining armor who could destroy any foe.

However, that night was destined to change someone’s life. The fight began and people realized that Bryan was no fodder, he was a fighter. Though Sage had the first round on many cards, Bryan was giving the young man a run for his money. As the second round began, it went to the ground and fans witnessed the golden boy of UFC tapping out to a vicious submission hold.

The victory by many was considered a fluke, even the UFC president said it was because Sage was ill that he lost. It did get Bryan the attention he deserved, but it also attracted plenty keyboard warrior hate. Detractors called his victory a fluke.

Three months later Bryan Barberena made his way down to the octagon again, this time against Warlley Alves at UFC 198 in Brazil. Bryan was facing his foe in his own backyard. Whispers backstage say that it was a punishment as he had defeated the golden boy and hence pitted against the undefeated Alves.

This time again a heavy underdog, Barberena was expected to lose and with almost everybody against him, it looked impossible for the Arizona native to pull off an upset.

That night the MMA world learnt a few things. One was Bryan’s victory over Sage was no fluke, and two, Bryan was no prey, he was a hunter. The fight turned out to be a beating of a lifetime for Alves who lost his perfect record via unanimous decision to the underdog Bryan “Bam Bam” Barberena.

Three months and two days later my phone call is received by a husky and calm voice. The receiver introduces himself as Bryan Barberena.

After exchanging formal introductions I go for my first question. The most difficult part of any journey is to begin it, to make up your mind by taking the path which your idols took, going forward with or without the support of your loved ones. Talking about how he began his journey and what got him into MMA, Bryan said, “I was always a fan of combat sports; I loved watching boxing and MMA. I was always inclined towards heavy action sports and was a football player. After completing my high school I decided to try my hands on this sport and had my first fight in 2009. I fell in love with it and now find myself over here.”

There is a very famous saying, “Your near ones’ support is your biggest strength.” This is the case with Bryan as he opens up about his personal life. “My family holds a big hand in my success, they have been very supportive of me and their love and belief in me is the reason why I stand over here. My wife has helped me a lot in chasing my dream. MMA doesn’t actually pay all bills for not-so-famous fighters like me. I have to do other job to pay my bills. My wife stands as the only reason why I can dedicate appropriate time for MMA. She excels in her field and works hard so that we can pay all the bills.”

As Bryan talked about all this, I ask him whether having all these expectations behind him tends to add extra pressure. “No, as I said people around me are very supportive,” Bryan stated. “They all boost my confidence and hence it all adds energy and enthusiasm. I put in all of that energy to train as hard as I can; I make sure that their efforts do not go to waste by always putting on a show in front of them.”

Bryan has had an amazing 2016 so far. He has managed to earn the title of prospect killer by producing some really amazing victories against Sage Northcutt and Warlley Alves. Talking about this year, I go for one particular question which I had been dying to ask. Bryan had been an underdog not only in these two fights but in all his octagon appearances. Now standing with 3-1 UFC record, I ask him what were his thoughts on being labeled the underdog. “My label of being an underdog helps me in working hard and proving doubters wrong,” Bryan explained. “This label adds no pressure on me. I have been called the underdog half my career and I think people will still use it for some time. But when they see me grow and take over they will understand how wrong they were.”

Bryan seemed to feel Northcutt was at least partly a product of good marketing. He spoke about the matchup. “As I entered the fight I knew I was going to win, I could feel it,” he said. “The people around me, my family, my wife, my father, everyone knew I was going to win. I was confident and was ready to prove it to the people that this kid was not as good as the people thought he was.”

In a recent statement Sage said that he lost because of staph infection and Bryan’s victory was a fluke. I asked him to respond to the statement. “I am ready to give him a rematch, but only if he picks up a few impressive victories first,” Bam Bam explained. “I am moving up the ladder right now whereas he is staying where he began from. I will be fighting again in 2016 and am looking for someone in the top 15.”

When it was announced that Bryan would be locking horns against Warlley Alves at UFC 198, some thought it was a punishment for Bryan defeating Sage. Warlley was one of the hottest prospects of the UFC and pitting Bryan against him in his own backyard perpetuated the rumor. But Bryan again proved he belonged to be in the big show and earned a unanimous decision against the undefeated Brazilian. Bryan commented on the fight. “Honestly it never felt like a punishment,” he said. “It felt like the Sage situation all over again. And I don’t think that facing a tougher opponent is a punishment. You want to throw tough guys at me, I am ready. I want to move up the ladder now, I am going to face tougher opponents and I am willing to put in that amount of hard work.”

As Bryan made it clear that he wanted to fight again in 2016, I asked him what his plans were for the coming years. “Yes, I will be fighting in 2016 and that too against someone in the top 15,” he stated. “And I do not know where I will be by the next year. I plan on to fight as much as my body and UFC allows me, I plan on to take fights and deliver my best in the octagon.”

Having been fighting professionally since 2009, I asked Bryan to describe his journey as a MMA fighter thus far. “It is a tough world, people think it is an easy job but in reality you got to work very hard,” Bryan explained. “I have seen many ups and downs in my journey. It has been both exciting and fun to disappointing. MMA is something that I love and hence I find myself over here. I am a UFC fighter and I am ready to compete against the best in the world.”

As our conversation came to a close I asked Bryan to leave a message for people who wish to pursue MMA as a career. “As I have said, it is a tough world,” Bryan stated. “It takes a lot of courage to be a MMA fighter. You have to be very passionate about the sport and you need to have the hunger for accepting the grind. The sport requires a lot of hard work both physically and mentally. If you are determined no one can stop you, and go for your dreams. Remember, you will see many lows in your career but never give up.”

On this inspirational note my conversation with our favorite underdog comes to an end.

Thanks for your time “Bam Bam”.