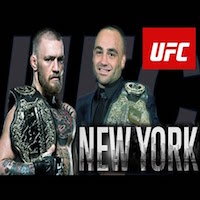 UFC lightweight champ Eddie Alvarez gave his analysis to Flo Combat about Conor McGregor and it was surprisingly tame. Some MMA fans might consider accurate and some might even feel it is dead on. The bottom line is that Alvarez didn’t completely obliterate McGregor like he has done in the recent past and he does bring up some good points. Check it out.

Technically, I think Conor’s a good fighter. He probably does a lot of drills so technically he’s sound, but for me, fighting after a certain point, technique doesn’t matter in a championship fight. It comes down to will, it comes down to spirit and your willingness to win the fight. I think that’s the main ingredient to what makes a champion and I think that’s what he’s missing. I honestly feel that’s what he’s missing. He’s very technical, he’s a clean good fighter for a round, round and a half, but when you get deeper into a fight we’ve all seen him in moments of adversity and it doesn’t look good to me–it doesn’t look like championship caliber. It doesn’t look like someone who’s willing to take a beating and get on that stool and come back out and give it back to the guy.

UFC 205 will see the two champions square off for the lightweight title on November 12, 2016 in New York.