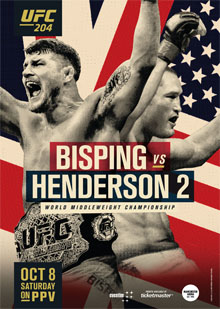 ProMMAnow.com will provide live results and real-time updates throughout the evening starting with the Fight Pass prelims at 7 p.m. ET, moving to the Fox Sports 1 prelims at 8 p.m. ET, and the main card action starts at 10 p.m.

Danny Roberts vs. Mike Perry — Perry finished strong in rounds one and two but Roberts was landing some hard shots and stunned Perry in both rounds. I thought Roberts almost had him out in round two but let up. Perry lumbering forward, stalking the whole fight. Roberts’ straight left was money all night. He stunned Perry in the third with it again but Perry was able to bust up his eye and recover. Nice head kick from Roberts with about 90 seconds to go. That’s the second good one Perry ate tonight. Perry still pressing. Perry connects with a counter hook, then a knee to his stunned opponent and Roberts goes down with another right hook. Perry lands another couple for good measure. Great fight. Stopped a little late.

Łukasz Sajewski vs. Marc Diakiese – Diakiese wore Sajewski down in the second round with his striking and finished him off with solid punch combinations and a couple of big knees.

Davey Grant vs. Damian Stasiak – Fight was not that exciting until Stasiak locked up an armbar in round three. He stretched it tight, hyper-extending it and forced the tapout. Grant’s arm is probably jacked.

Brad Pickett vs. Iuri Alcântara – Alcantara lands a hard spinning elbow that catches Pickett on the temple and drops him. Alcantara locks up an armbar and after some struggle Pickett escapes but then gets caught in a triangle and taps out.

Mirsad Bektić vs. Russell Doane – Bektic drags Doane down and works for the rear-naked choke and Doane taps out.

Stefan Struve vs. Daniel Omielańczuk – Struve gets a trip takedown with just over 2 minutes to go in round one. Gets full mount and Omielanczuk gives up the back. Struve looks for the choke but Omielanczuk survives round one. Hard knee in the clinch from Struve in round two, then gets another trip takedown and locks up a D’arce choke for the tap.

Ovince Saint Preux vs. Jimi Manuwa – Manuwa went for a guillotine choke at one point and looked to have landed a knee to the face before the bell. OSP seems okay after round one, but breathing pretty hard. Manuwa looks fresher. OSP with some nice leg kicks to start round two but Manuwa getting the better of the boxing, touching him up. OSP pins him to the cage briefly, but Manuwa comes back strong with the striking wearing OSP down. OSP got his hands low too. OSP eats a head kick. Manuwa with hooks to the body. Leg kick. Right hand and a flying knee from Manuwa. OSP fading, he’s exhausted. Manuwa smells blood and knocks him out cold with a left hook. OSP falls hard. Manuwa tries to land one after he was out but the ref stopped him.

Vitor Belfort vs. Gegard Mousasi – Vitor connects with a left early. He looks for that blitz but Gegard waves him off. Gegard connects with a punch combo. Gegard pretty much controlling the standup throughout round one. Lands a nice one-two combo with just under a minute to go. Vitor ties him up for several seconds before the bell sounds to end round one. Nice body kick from Vitor as round two gets going, Mousasi counters with a solid punch. Belfort defends a takedown. Mousasi working the jab, hurts Vitor badly with a head kick the Mousasi unloads a punch combo from hell. Somehow Vitor is still there, clinches up and Mousasi dumps him to the ground. Mousasi has him busted up, gets full mount and punches until the ref halts it.

Michael Bisping vs. Dan Henderson – Hendo looking for that H-Bomb and with under a minute to go in round one he drops Bisping. He goes for the finish and almost gets it with a big elbow. Bisping survives but is busted up badly with a huge cut under his left eye. Wow. Reminiscent of their first fight except Bisping survived this time, so far anyway. Bisping seems okay and is right back in Hendo’s face pressing the action. Bisping backing Hendo up with punch combos and jabs. He’s throwing quite a few head kicks as well. Nice three kick combo from Bisping. Bisping lands a couple nice high knees. Bisping continues to touch him up, rocks him with a big right. Bisping lands a low blow but ref missed it. Hendo backing up then uncorks a right overhand that drops Bisping once again. Hendo happy to stay on top until the bell. Wow! Very exciting round. Round 3 now. Bisping pressing the action again. Nice right from Bisping. Another right causes Dan to stumble. Nice leg kicks from Bisping as he continues to try and chop the legend down. Body kick from Bisping, but he eats a hard right. Bisping with a hard right. Hendo lands a right. The cut under Bisping’s eye is BIG. Round 4 now. Counter right from Hendo. Bisping jaws at him, lands a low kick, then a high kick. Another low blow from Bisping gets Hendo a timeout. Hendo working some nice left hooks and jabs. Just misses an H-Bomb. Hendo with a clinch knee to the face at the end of the round. Round 5 is next. Hendo’s final round ever? Historic moment here, especially if he can make the magic happen. Hendo being more active to start this round. Bisping connecting from the outside, staying measured. Bisping with a nice punch combo. Hendo gets inside with a right but Bisping eats it. Hendo with a knee tap takedown with 90 seconds to go, he can’t hold Bisping down though and they’re back up. Hendo shoots again, can’t get it. Hendo goes for a rolling kick at the bell. LOL. That was a good fight, better than I expected. Bisping showed some great tenacity and durability here. Glad to see him keep the belt since Hendo is retiring. Hendo officially retires after the fight.