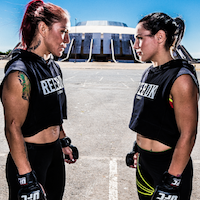 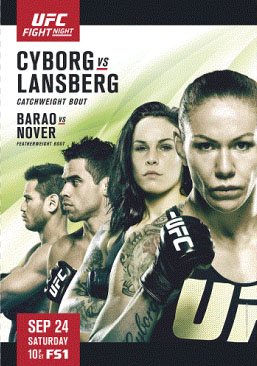 Women’s MMA powerhouse Cris Cyborg (Cristiane Justino) returns to the Octagon tonight against Swedish striker Lina Lansberg in the UFC Fight Night 95 main event from Brasilia, Brazil. Cris is a HUGE favorite in the 140-pound catchweight bout, but after such a tough weight cut, will she still be able to live up to expectations, or will “The Elbow Princess” silence Cyborg’s reign of pain?

Round 1 – Franca starts strong and busts Gillespie up, but Gillespie also stuns Franca with a punch or two, gets the takedown and takes Franca’s back briefly. Franca escapes to his feet with under a minute to go. But Gillespie lights him up with a right then scores a takedown before the bell.

Round 3 – Gillespie works hard for a takedown and gets it about 90 seconds in. He works to full mount and delivers calculated ground and pound. Franca gets to half guard and almost escapes but the former Division I wrestler controls the situation and returns to full mount. Effective ground and pound forces Franca to give up his back before the bell.

Great look for Gillespie in his UFC debut.

Round 1 – Urbina stunned early with a left and immediately goes for a takedown, but Luque defends and fires back with a big punch combo, finishing him off in the pocket with an overhand right that puts Urbina to sleep! Crowd goes nuts.

Round 1 – Patrick with a takedown right away but Ray is right back up. Patrick gets a trip takedown from the clinch but Ray is back up. Patrick goes for another takedown but Ray lands on top, then goes for an armbar. It’s tight and Ray holds on despite Patrick standing up, Ray is literally straight upside down on his head holding the armbar and finally lets go after several moments. Patrick ends up with top control, escapes a guillotine attempt and controls the remainder of the round. Landed an elbow and couple good shots.

Round 2 – Patrick with a couple punches sets up a takedown. After an eventual standup Ray gets a takedown and takes Patrick’s back with a body triangle that traps one of Patrick’s arms but is unable to capitalize before the bell.

Round 3 – A left hand sets up a takedown from Patrick. Ray looking for a kneebar, but ends up flat on his back as Patrick works from top with strikes. Patrick looks for an armlock from half-guard but is unable to get the finish before the bell.

Round 1 – Nice couple body kicks from Silva. Chagas responds with a solid right. Low kick from Silva but gets dropped with a left hook. He bounces up and Chagas puts him against the cage where he delivers a couple shots and a knee. Back to the center. Jump knee from Chagas scores but Silva appears okay. Chagas switching stances throughout. He ducks a kick but gets hurt with a right hook from Silva. Silva goes for the finish but is unable before the bell. Great back and forth action!

Round 2 – Silva takes an accidental low blow and timeout is called. Chagas ends up on his back as they restart. Chagas scrambles to his feet, lands a solid left then drops Silva with an uppercut. Chagas now on top landing solid elbows. Chagas takes his back, now in full mount and landing more elbows. Moves to side mount, then back to full mount. Chagas goes for an armbar, loses it and the position. Silva now on top. Silva with a big right, moves to side control, then takes Chagas’s back before the bell, and locks up the choke, but not in time! Very high paced fight with both guys looking for the finish at all times.

Round 3 – Body kick from Silva, Chagas responds with a single leg takedown attempt. Silva defends and Chagas presses him to the cage. Ref separates them quickly. Nice body hook from Silva. Silva scoring with kicks and punch combos, utilizing the jab. Chagas rocks him with a right, scores with a knee. Silva’s jab paying off. Uppercut, right hook follow from Silva. Chagas goes for the takedown, but Silva jumps on his back, locks in the choke and an extremely exhausted Chagas quickly taps out.

Most definitely Fight of the Night so far! Gonna be hard to beat that one, thought Big Country and Bigfoot may give them a run for their money.

Round 1 – They tie up early and Formiga puts him on his back. Moves to side mount. Formiga controlling from top. Ortiz rolls him though and ends up on top inside full guard. Dustin working body shots after defending against an armbar. Dustin postures up with an elbow. Dustin puts him against the cage, still working the body shots. Jussier manages to get to his feet right before the bell, but stays clinched. Close round, very even.

Round 2 – Body kick from Ortiz. Clinch, elbow on the break from Ortiz just misses. Good movement from Ortiz but ends up on his back after a takedown attempt. Full mount from Formiga. Ortiz gives up his back and Jussier gets a body triangle. Body shots from Jussier as he maintains control looking for the choke. Jussier keeps switch sides with the body triangle as Ortiz starts to break it. 30 seconds left. 10-9 Formiga.

Round 3 – Good movement from Ortiz, landing some punches here and there. Nice overhand right and hook to the body. Clinch, Formiga gets a body lock from the back and hops on with both hooks in, now back with the body lock. Formiga looking for the choke again. Ortiz defends and gets top control before the bell, but  too late. Great effort from Ortiz but that grappling of Formiga is serious.

Round 1 – Takedown from Yahya early, locks on an arm triangle. Yahya continues to hold it, slowly tightening it over a matter of a couple minutes. Tanaka eventually escapes but Yahya is in side mount. Tanaka explodes in a scramble and ends up on top dropping shots. Yahya holding on from bottom preventing much damage. Knees to the back of the legs from Tanaka. 10-9 Tanaka as I see it.

Round 2 – A low blow from Yahya gets Tanaka a timeout. Great scramble as Yahya goes for a takedown. Tanaka dumps him with a judo throw but Yahya ends up with a bodylock from behind as they are back up. Yahya gets a double leg takedown briefly, they stay locked up and a scramble ends with Yahya on his back. But Tanaka is back up although Yahya still has a bodylock. Yahya drags him down, Tanaka has Rani’s neck. Yahya gets back up, and is able to gain control briefly before Tanaka judo throws him. Tanaka back on top at the end of the round. 10-9 Yahya as I see it.

Round 3 – Yahya with an early takedown, Tanaka gets top control where he lands hammerfists and punches, but not active enough apparently as they are stood up. Nice right hand from Tanaka, he follows up with a takedown. Several punches from Tanaka until he gets Yahya in a crucifix. Yahya escapes to a bodylock and controls Tanaka. Tanaka gets control and lands several hammerfists before the bell. Tanaka definitely did more damage this round even though Yahya showed good control of the grappling. 10-9 Tanaka as I see it.

Round 1 – Prazeres catches a kick and drops Burns with a right. He lets him up, lands a leg kick and is stalking Burns. Prazeres lands a combo but gets dropped with a counter right. Back up and Prazeres scores with a punch and leg kick. Burns lands a kick to the groin that gets a brief timeout. Right hook, left knee and left body kick from Burns. Low kick from Prazeres. He gets a takedown but lets Burns right up. Right uppercut from Burns. Prazeres gets one more takedown before the bell.

Round 2 – Prazeres takes an eyepoke for brief timeout. Prazeres hunting for that KO. Hard low kick. Burns lands another kick to the groin and timeout is once again called. They shake hands before the restart. Prazeres catches a kick and dumps Burns for another takedown. Lets him up though. Huge low kick from Prazeres. Burns lands a solid knee to the chin after his takedown attempt is stuffed. Right counter from Burns. Burns looks low and delivers a knee to the chin. Left hook, overhand right from Prazeres. Another overhand right from Prazeres. Burns breathing heavy. Left hook from Prazeres.

Round 3 – Prazeres crumples Burns with a body shot. He tries to finish with ground and pound but Burns survives and Prazeres lets him up. Burns was hurt. Prazeres keeps on the pressure. Burns seems to have recovered now and is starting to fire back. Low kick from Prazeres. Punch combo from Burns as he pours it on in the final 30 seconds. He backs Prazeres to the cage, but gets taken down at the bell. Prazeres should take it no problem.

Note that Prazeres didn’t make with for this fight hence the 158-pound catchweight.

Round 1 – Pepey lands heavy shots out the gate but De La Torre locks him up for a takedown. He’s right in Pepey’s face as he gets up and they start brawling. Pepey getting the better of it and hurts him against the cage. He’s wobbly. Both guys throwing all they got. Pepey drags him down and takes his back with a body lock triangle. De La Torre defends the choke, but Pepey locks it back up as De La Torre gets to his knees and this time there is no escape.

Round 1 – Spicely pulls guard early. Nice omoplata from Spicely but Santos escapes and lands a nice body kick. Right hook and takedown from Spicely. He gets on Santos’s back as he stands up, Spicely locks up the choke as they drop back to the ground and Santos is forced to tap. Big win for the part-time pro wrestler/MMA fighter.

Lansberg somehow survived the first round but got busted up pretty bad. Lots of clinch fighting. Cyborg took her down with a big slam as well. In round two Cyborg continued the assault in the clinch, took Lansberg down again and then got the TKO finish.