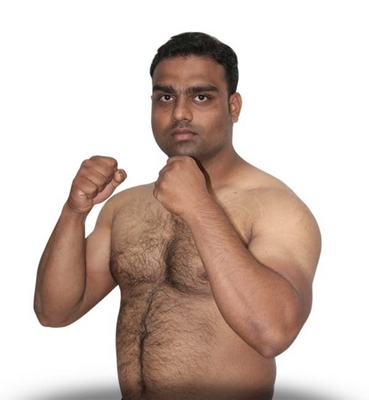 Hemant Wadekar is an Indian light heavyweight fighter standing with a record of 2 wins and 1 loss. His last win was a knockout victory over Sher Khan. He is set to compete in the first ever MMA league organized by Super Fight League. He will be a part of the team U.P. Nawabs.

MMA is not a very popular sport in India. What got you into MMA?

I come from wrestling background. I have been wrestling since I was 16-years-old. I have wrestled at national level and have won the state championship multiple times. I came to know about MMA via a fellow wrestler Bharat Kandare. I took a look at one of his matches and decided if he could become a MMA fighter, why not me.

I would consider Bharat as an influence. He is a very good person, watching him compete gave me the confidence to try my hands on MMA. My journey as a MMA fighter has been fun so far. I started training at a gym in Indore, it was a good gym but did not have the resources to help me improve as a fighter. Hence I went to Delhi and started training in Crosstrain. The gym has helped me a lot and I have managed to improve my striking.

Did people around you support the decision of you taking MMA as a career?

No. People did not really believe in me. My parents however believed in me. I am very fortunate to have them around, they have always supported me and hence what others thought about me didn’t really affect me.

Forget combat sports, people in India do not select sports as a career. The very mentality of the people in our country is study, get a degree and get a job. On top of that combat sports are not really popular, hence the population which decides to try their hands is pretty thin, so the number of people which take it as a career is really low.

You are known for finishing your opponents. You have one win via knockout and one via submission, can you describe your mental state as you take on an opponent. What is your background in the combat sport world?

While entering the cage to fight I stay calm and focused. I come from a wrestling background and try to take my opponent on ground and finish the match before the final bell. I come from a wrestling background, I have been wrestling for the past 12 years. Apart from that I have been practicing Muay Thai for over a period of time. I have won the national championship twice and since joining Crosstrain I have improved my striking a lot.

What are your thoughts on the state of MMA in India?

MMA in India is at its very inception. People do not know much about it. As it will gain popularity the state of MMA in India will improve.

As a sports man what is your ultimate dream?

My dream is to be the best, putting it in simpler words I want to become a UFC champion. I want to make my parents and my country proud and be that pioneer who takes the popularity of MMA in India.

What is your message to youngsters who are aspiring to pursue MMA as a career?

The journey is going to be a tough one. If you want to take MMA as a career, first make a background in any combat sport, take that sport and master it. Then take as many amateur MMA fights you can, and once you have gained experience then go for professional MMA fights.

Thanks for your time Hemant.