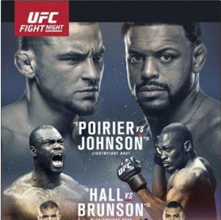 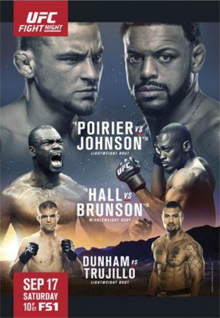 Chas Skelly’s win over Maximo Blanco was sick. Both guys ran at each other with flying kicks as the bell rang. Blanco got knocked down from the flying kick and Skelly jumped on a guillotine, switched to a D’arce choke, and scored the fastest submission in WEC and UFC featherweight history in 19 seconds.

Uriah Hall got dropped hard early in round one by Derek Brunson and referee Herb Dean stopped the match as Brunson followed up with ground and pound. Only thing is, none of the ground and pound was actually connecting. Watch the replay to see if you agree with stoppage.

There was no question at the result in the main event as Michael Johnson knocked Dustin Poirier out after dropping him with a counter right and delivering big punches to his grounded opponent to shut him down. Check the replay.