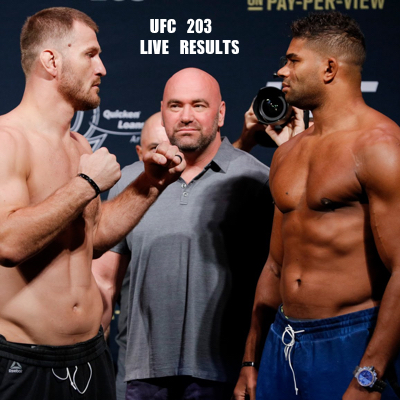 ProMMAnow.com will provide live results and round-by-round updates beginning with the Fight Pass prelims at 7:30 p.m. ET, moving to the Fox Sports 1 prelims at 8 p.m. ET, and the PPV main card kicks off at 10 p.m. ET.

Looking to watch the UFC 203 pay-per-view main card live stream online? You can do that here.

Round 1 – Fairly even kickboxing round. Both guys kept a high pace and landed some decent shots. Yancy caused Sean to stumble at one point with a hard kick that was partially blocked.

Round 2 – Yancy hurts Sean with another kick, this one is high and also partially blocked but it didn’t matter. Spencer goes down and Yancy locks up a choke for the finish. This was Yancy’s debut at welterweight.

Round 1 – Dober with some hard leg kicks but gets tagged by Gonzalez and clinches up briefly. A low blow from Dober gets Gonzalez a timeout. As they start back Dober swarms Gonzalez with punch combinations and knocks him out COLD! Damn, that was aggressive!

Round 1 – Big right from Lentz, lands two more overhand rights. Lentz with a takedown but he’s back up and lands a body kick. Lentz puts him back down a couple times, then another trip. McBride goes for a leglock, but Lentz gets free and delivers elbows and ground and pound. Lentz riding his back and attempts a guillotine but McBride slips out. McBride looking for a leglock again but Lentz maintains control on the ground. Lentz gets full mount, McBride gives up the back mount. Lentz rides him until the bell. 10-9 Lentz

Round 2 – Body kick from McBride, he looks tired though and his head is straight up. He’s eating shots but hurts Lentz with a punch and they go to the ground briefly. Lentz looking for a guillotine but abandons it and gains top position. Briefly looks for a choke. Some nice grappling going on but Lentz still in control and has the back once again. Lentz flattens him out face down and pounds McBride with punches until the ref stops it.

Round 1 – Hard leg kick from Tavares. Caio with a single leg takedown but Tavares right back up. Rest of the round is spent clinched up against the cage for the most part.

Round 2 – Hard body kick from Magalhaes. Tavares lands a hard leg kick a minute or two later and a nice right hand before Caio pushes him to the cage, gets a brief takedown but Tavares is right back up.

Round 3 – Caio jumps on a guillotine during a clinch but can’t complete it. Back to the feet with more clinch fighting. Left hook from Tavares on the break, hard leg kick. Tavares scores with more punches with about 2 minutes to go. Body kick from Tavares. Both guys finish fairly strong.

Round 1 – Hard right hand from Jessica as she scores first. This is Jessica’s home crowd. Bethe circling on the outside, she takes a counter right to the jaw. Leg kick from Bethe. Inside leg kick from Jessica. Hard right from Jessica. Counter left from Bethe. Eye catches a kick and dumps Bethe but she’s right back up. Correia with a body lock against the cage. She backs out before the bell. Pretty close round.

Round 2 – Bethe finding her rhythm more this round, landing some nice leg kicks and jabs. But she takes a poke in the eye. Ref didn’t see it and it continues. She seems okay. Nice counter right from Eye. Body kick and a right from Eye. Bethe pursuing, jab to the chin. Under a minute to go and Bethe putting on the pressure. Eye avoids a takedown. Bethe attempts to clinch but eats a right hook. 10-9 Bethe

Round 1 – Calderwood strikes first then eats a counter left. Andrade gets inside for a big slam. Calderwood gets back up but Andrade picks her up over her head for an even bigger slam. Powerful. Andrade has a cut over her left eye but she’s working the ground and pound from top. Joanne tries to set up a triangle but gets slammed. She still has Andrade in full guard though. Andrade gets to side mount. Calderwood gets to half guard but eats some hard shots. Andrade postures up with more shots and moves back to side control. Calderwood fights to her feet but Andrade jumps on her neck with a guillotine and Calderwood taps.

Round 2 – Low kick from Rivera. He then takes a low blow and timeout is called. Faber gets buckled on a hard leg kick. More leg kicks from Rivera. Another one on the inside. More leg kicks batter The California Kid’s limbs. Faber countered with a right and left. 10-9 Rivera

Round 3 – Body kick from Faber. Faber gets buckled with another leg kick. Again with an inside leg kick. Faber pokes him in the eye and timeout is called. Replay shows an openhand slap from Faber which caused the eyepoke. Leg kick from Rivera as they restart. Outside leg kick from Rivera with just over 2 minutes to go. Nice front leg head kick from Rivera out of nowhere surprises Faber but he eats it. Right hand from Faber. Left hook from Rivera. Faber tries to clinch but Rivera just throws him off. Hard hard leg kick from Rivera. Faber countered with a right that stuns him. Lead left hook from Faber, again. Both guys try to finish but it’s not to be. Rivera is saying he can’t see out of his right eye. We wonder how bad it really was when the doctor checked him out earlier in the round and let it continue. Rivera definitely wanted to keep fighting.

Round 1 – This is bizarre. Gall with an immediate takedown and Gall postures up with punches and elbows. Gall all over him on the ground and has side mount. Full mount from Gall, Punk gives up his back. Gall stretches him out, lands punches, now looking for the choke. Flattens him out again with heavy shots. Punk covering up, Gall locks up the choke. He gets out of the first one. Gall locks up another and Punk taps. Complete domination. Gall was clearly trying to make a statement here that no pro wrestler with no fight experience is going to come in and take him out. Punk talking to him after the fight being gracious. Punk’s ear is busted up bad. He’s very disappointed. Gall called out a “corny” Sage Northcutt afterward.

Round 1 – Fabricio runs out with a flying sidekick to the face and lands it. Fabricio shoots, stuffed. Lands a right hand, inside leg kick, right hand and a body kick. Leg kick from Werdum. Werdum tries a forward flip kick but misses. Inside leg kick from Werdum. Throwing some wild stuff. Browne complains of a problem with his hand, Fabricio tags him even though he’s protesting, ref halts it and doctor comes in for a moment and lets it go on. Right hand from Werdum as they restart it. Werdum clips him with a right during an exchange, he pushes Browne to the cage. Spinning kick from Werdum catches Browne in the back. Lead left hook from Browne. Inside leg kick from Werdum. Right hand from Browne, Werdum shakes his head. Browne catches a kick and sweeps the leg. After eating a punch, Werdum lands a leg kick and drops Travis with a right hand. Werdum jumps on his back and looks for the choke. Werdum rides his back and lands punches but Browne survives the round. 10-9 Werdum. Coach Edmond is giving Travis hell saying, “this motherf*cker is too slow for you.”

Round 1 – Stipe Miocic is one solid dude. Touch gloves. Overeem using a lot of footwork early. Mobile. Stipe trying to hunt him down. Body kick from Alistair. He drops Stipe with a left then jumps on a guillotine. Stipe survives then gets up to chase after Overeem who avoids him. He looks unsteady though. One two from Stipe. Alistair fires back and scores. Stipe is back on him and looks in trouble. Stipe trying to finish, backs him to the cage. Stipe lighting him up. Overeem trying to run away. Overeem with a hard body kick, left and uppercut and a knee. Damn what a fight. Both guys have been hurt. Great action. Left from Stipe. Front kick. Overhand left from Overeem. Body kick from Stipe. Right hand, lands a nice punch combo against the cage. Scramble and Stipe gets on top landing punches. He postures up and knocks Overeem out with hard direct shots to the chin. That was an amazing fight. The champ really had to come back from adversity here. Wow! That’s why we’re MMA fans my friends. In no other sport is the warrior spirit exemplified like it is in MMA. … Stipe gets the crowd hyped afterward and they love this guy in Cleveland. … Overeem says he felt Stipe tap during the guillotine choke but Joe has the replay shown twice and there’s no tap.