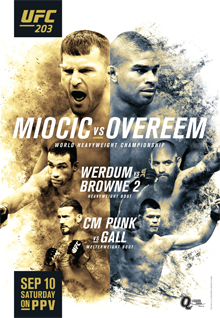 UFC 203: Miocic vs. Overeem takes place on Saturday, Sept. 10, from Quicken Loans Arena in Cleveland, Ohio. Here’s how you can watch the entire event, including the UFC 203 pay-per-view main card live stream.

UFC heavyweight champ Stipe Miocic puts his belt on the line for the first time as he takes on former Strikeforce and K1 champ Alistair Overeem in the main event. Former heavyweight champ Fabricio Werdum hopes to get back in title contention with a win over Travis Browne in the co-headliner. Also, former WWE superstar CM Punk makes his long-awaited UFC debut against up-and-comer Mickey Gall in welterweight action.

Fans can watch the UFC 203 pay-per-view main card live stream starting at 10 p.m. ET Saturday online in the player below for $44.99 (via Youtube). The HD version can be ordered for $59.99 via UFC Fight Pass.

Televised UFC 203 Preliminary Card action will be headlined with a women’s bantamweight showdown between Jessica Eye and Bethe Correia and will broadcast live on Fox Sports 1 starting at 8 p.m. ET.