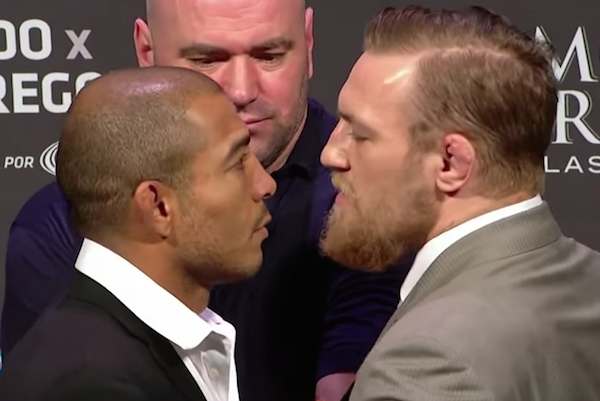 Featherweight legend Jose Aldo talked to Portal do Vale Tudo about seeing a side of Conor McGregor we as fans wouldn’t even know existed. When Conor is in front of cameras he’s cursing, trash talking, and generally being the good kind of obnoxious your friends were in high school. According to Aldo, McGregor is really a nice guy.

If I had more fights with him in the featherweight division, it would be very profitable, but I am not his friend, he can go one way and I go to the other.

I’ve seen him stand facing the wall, staring at nothing and everyone trying to provoke him, and he has a glazed look. He’s a normal, quiet guy, but if you see a camera or an Irish person close, he turns. Outside you see him laughing, joking, talking usual — but then he turns in such a way that you think: ‘son of a ***’.

Sometimes you play jokes and he is laughing. There was one day we sat and he said to get coffee, and I said I wanted sugar, and he answered like: ‘good’. I met him recently at a hotel, he was eating breakfast and I said I wanted barbecue, he said it was his breakfast, of course.

But most of the time we met, there was always someone [with a camera] shooting, so he had to keep it up. But with no camera, the face changes completely.

Given the fact that Aldo was crushed in under twenty seconds by McGregor it is kind of hard to believe a single positive word would come out of his mouth about the Irishman. Especially after Conor verbally bashes him publicly any chance he gets.

What do you think? Is McGregor really a good guy?