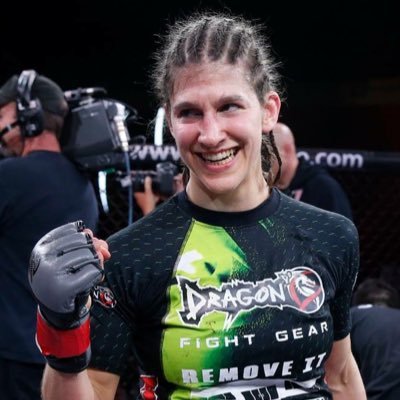 Invicta FC 19 takes place Sept. 23 in Kansas City and will be headlined with a interim flyweight championship as Jennifer Maia (13-4-1) defends her belt against women’s MMA pioneer Roxanne “The Happy Warrior” Modafferi (19-12). Roxanne has looked great since her return to the 125-pound division and has won four of her five matches since signing with Invicta FC in 2014. She most recently won a split decision over DeAnna Bennett (8-2) in March following a TKO over Mariana Morais (9-3) in September of last year. ProMMAnow.com caught up with Roxanne this week to talk about her upcoming opponent and how she continues to evolve after nearly 13 years as a professional athlete.

PMN: Have you ever considered walking out to the 1984 rap song Roxanne, Roxanne by UTFO?

ROXANNE: I have never even heard of that song before, and no offense, I am not impressed with it. :)

PMN: You have an upcoming interim flyweight title match with Jennifer Maia in Invicta later this month. Were you impressed with her decision win over Vanessa Porto in March and were you able to pick up on anything watching that fight since you have also tangled with Porto, not once, but twice?

ROXANNE: I actually thought Porto won the fight, but it was very close and I was impressed with both fighters. My coach John Wood picked up a lot from their fight and made me a good game plan. He’s the brains when it comes to striking – the player holding the video game controller- I just execute the combos he inputs. I think I have an answer for anything she can throw at me. I want to see how good she is.

PMN: When you began fighting professionally nearly 13 years ago, the landscape for women’s MMA was practically non-existent. You have seen so much evolution of the sport during your career and you have been one of the few who have been able to evolve with it and remain at the top of her game. What do you attribute your longevity to?

ROXANNE: I love MMA so much and I just kept training and training. My growth stagnated at a certain point, which is evident in my losing streak of several years. However, after I found Syndicate MMA in Las Vegas and Coach John Wood, I began to evolve.

PMN: What was the inspiration behind “The Happy Warrior” nickname?

ROXANNE: I always tried to end all my blog entries on a positive note, even if I had just ranted about something negative. One time when I was about 4 fights into my career, a fan on Myspace (remember Myspace?) commented, “You are the Happy Warrior!” I took that and ran with it. It’s actually a poem by William Wordsworth. Check it out here.

PMN: Do your opponents ever get mad at you because you’re so happy?

ROXANNE: I don’t think so. No one has said anything like that.

PMN: Please give us a brief synopsis of Roxanne Modafferi’s philosophy on life and fighting.

ROXANNE: Humans want to be happy, so try and spend your energy on enjoying every little positive thing that happens in your life, and not focusing on negative things as much as possible. Our attitudes and ways of thinking about things define our reality. Often by changing the way you think about something, which can be done by looking at it from another perspective, you can change the way you feel about something. Then you’ll become happier, or at least less unhappy.

MMA is never fair. You could train your butt off while your opponent barely trains. Then in the fight, your opponent could wing a crazy overhand and knock you out. Or some girl could get a fight contract because she’s beautiful, even though another has twice the experience and skill-set. However, those who are really constantly successful love doing the sport of MMA. They make sacrifices of their time, energy, personal life, physical health, etc, to train hard. Fighters should respect their opponents because they’ve made hard sacrifices to get to where they are, just as you have. You step on other people’s careers to climb your own ladder of success.

PMN: What prompted you to take your first martial arts class and when did you realize this would be a lifelong pursuit and a way to earn a living?

ROXANNE: I never once thought I’d be able to earn a living doing MMA. I didn’t think that when I first started, and I don’t even think that now. I’m still not making ends meet from fighting. When my Invicta and fight sponsor money runs out, I pay the rent with the money I saved up at my former English teaching job because I’ve always lived frugally, rarely go on vacation or buy expensive stuff. However, when I was in college, I decided that going pro was something I could do, and the fire to train everyday started burning and stayed strong. I do believe now that I’ve developed a lifestyle and way of thinking of “martial arts” in addition to just “training” every day.

PMN: I love that you are a writer over at MMASucka.com. What has that been like to be an MMA fighter who is also an MMA writer? Do you ever get too much MMA? And I love how you quoted your own self in your most recent article!

ROXANNE: Haha I’m glad you noticed that I wrote my own quote in there! Actually it’s really hard, because when I write, I know I need to be objective about news and can’t write my opinions in there, so sometimes I’m not sure what to write about because I always have opinions. I try and stick to interviews because I know lots of people and I can speak Japanese. I’ve always wanted to be the English voice of Japanese fighters. I haven’t written an article in a while.

PMN: What advice would you give to young female fighters today who are interested in pursuing professional MMA?

ROXANNE: Come to Syndicate MMA. We have the best coaches. Lol But if that’s not possible, find a gym where the coach cares about the students. Take both grappling and striking classes and don’t be impatient. Work diligently and develop a love for the sport. Also, make yourself noticed somehow. If you have looks, use them. I do hate the “posing for pictures naked with boxing gloves over the boobs” but glamour photos can be done with class. Or smack talk or have a flashy fighting style or something. Being noticed and unique is important. This is a sport that only pays if people want to watch you.

PMN: Thanks so much for taking the time to speak with us. I really feel you are such a great representative of martial arts and we wish you all the best in your upcoming title fight on Sept. 23. Any parting words for our readers?

ROXANNE: My fans are my biggest sponsors, monetarily and emotionally! Every person who reaches out on social media to say hi is giving me a treasure with their positive energy. I’m a rich woman thanks to you guys. Also, Dragon Do and Remove it Restoration help me pay my bills, along with Top Notch Fighter, Robvark, Herbal Papaya, Cryohelmet, and many others. Thank you.

Follow Roxanne on Twitter at @Roxyfighter and check out her website www.roxannemodafferi.net to read her very entertaining blog and keep up with her latest happenings. Watch Roxanne fight Jennifer Maia for the title on Sept. 23 at Invicta FC 19 exclusively on UFC Fight Pass.