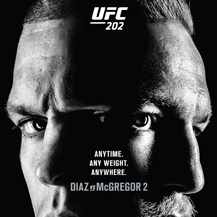 When Irish fighting sensation Conor McGregor rematches Nate Diaz on Saturday at UFC 202 in Vegas, the latest odds are oddly enough favoring McGregor. How is this you say after getting submitted by the younger of Stockton’s baddest siblings in March? Apparently, guys like Brendan Schaub of famed The Fighter and The Kid podcast believe that McGregor will repeat what he was able to get done on the feet in their first matchup, except this time will be more measured and will be better prepared cardio-wise to go the distance if need be against a naturally larger opponent. I might agree with that if I didn’t take into account Diaz had just a little over a week to properly prepare for their first fight. Kenny Florian is also picking McGregor this time around. He also picked the Irishman against Diaz the first time.

Here’s what I think. Conor cracked him with his hardest punches in their first fight and couldn’t put Nate away. What makes us think it will be different this time? Because he will have more time to adequately prepare? Nate’s chin is pretty legendary, and yes he tends to cut, but he’s not likely going to be able to knock Nate out, and you’re not going to out-tough Nate Diaz. Not gonna happen. You going to out-cardio Nate Diaz? Probably not gonna happen. Say Conor even drops Nate, he will probably need to go to the ground to finish him with ground and pound, and he will be in danger there too. Nate’s volume of punches combined with his 170-pound power and a FULL training camp should be enough to wear The Notorious pugilist down like a piece of old Blarney Stone. Conor gets hurt, Nate takes that back and proves again that BJJ can get it done anytime anywhere. That’s one possibility. The other possibility is if Nate cold knocks him out. Either way, Nate Diaz got this. There’s your pick.

The co-main event between Anthony “Rumble” Johnson (21-5, 15 KOs, 0 subs, 6 decisions) and Glover Teixeira (25-4, 15 KOs, 7 subs, 3 decisions) is an interesting styles matchup with both guys packing big power and both with legit wrestling skills. The main difference is Glover is a really skilled submission artist and four of Rumble’s five losses have come by submission, most recently against Daniel Cormier in May. Both only have one KO loss on their record and are known for their granite chins. This one is gonna get violent, no doubt, but with everything else being relatively equal, I have to reckon Teixeira’s submission game gives him the edge. There you go, with another underdog pick.