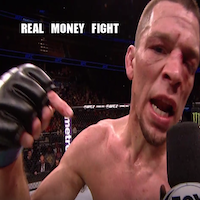 Folks, we’re just days away from what could be called the biggest rematch and fight in UFC history. Their first fight was the highest drawing UFC pay-per-view of all time, and the rematch could shatter their first viewership and money-making record. The first fight made 10-year UFC vet Nate Diaz the millionaire he deserved to be, and got him the respect from the promotion he deserved. The rematch will add several more zeroes to his nest egg as Conor McGregor seeks his redemption.

The oddsmakers still have McGregor a slight favorite at -115, while Diaz is at -105. But it’s very close and with a week to go we will probably see Diaz become the favorite — as he probably should have been all along.