Watch these scenes from upcoming ‘Hands of Stone’ movie 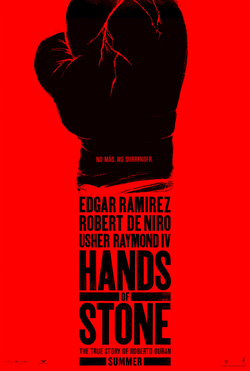 Roberto “Hands of Stone” Duran (103-16) made his professional boxing debut in 1968 at the young age of just 16. He competed until the age of 50 when he retired in 2001. Duran captured the WBC welterweight title from “Sugar” Ray Leonard (36-3-1) via unanimous decision in June of 1980. In their rematch five months later though, Duran took a beating and shocked boxing fans the world over when he suddenly stopped during the eighth round saying, “No mas, no mas.” He wanted no more from the Olympic gold medalist, and Leonard reclaimed his belt.

The upcoming movie “Hands of Stone”, set for release later this month, details Duran’s story and his epic rematch with Leonard. Edgar Ramirez plays Duran, Usher Raymond plays Leonard, and Robert De Niro plays trainer Ray Arcel who was in Duran’s corner on that fateful night. Take a look at some of the action from “Hands of Stone” in this new clip.

Watch the full trailer below and let us know what you think of Usher’s boxing skills in the comments section below.