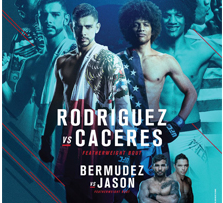 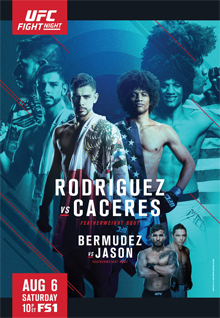 For the first time in the promotion’s history, the UFC will take its exciting talent down to Utah in Salt Lake City. The UFC Fight Night 92 card is headlined by some of the brightest prospects in the featherweight division, Yair Rodriguez and Alex Cacares.  Co-headlining is also a pair of featherweights, veteran Dennis Bermudez and Rony Jason, for a chance to put their name in the mix of this stacked division.

The main event for this card could easily turn out to be the most exciting. Both fighters are riding win streaks in the division and both look to continue climbing the ladder to the top. However, one must fall. Both fighters style match up relatively the same, as well as their physique. The dynamic kicks and lengthy reach both fighters possess won’t really be a distinct advantage like it would be in other fights.

Rodriguez is riding a 6-fight winning streak and is coming off of a brutal KO of fellow prospect, Andre Fili. Caceres’s momentum, however, doesn’t match quite up to Rodriguez’s. Before picking up two wins in the featherweight division, “Bruce Leeroy” was on a skid of a 3-fight losing streak, in which two out of the three, he was finished. Since then, though, he has picked up two decisions, the most recent being a lopsided win against veteran Cole Miller.

I like both fighters odds in this one, Caceres seems to have an edge on the ground, but as we saw in his last fight, Yair isn’t afraid to take down his opponents. I think Rodriguez is a more effective fighter in his unorthodox style and will simply outstrike Caceres in this one.

A must-win for both, the co-main event is set to be a fight full of tension. Jason is on a very bumpy road, coming off a now declared NC from Damon Jackson and before that, a split decision loss to Robbie Peralta. Bermudez however, is coming off of a decision win over a tough vet in Tatsuya Kawajiri.

On paper, Dennis is the one who was definitely has had the higher class competition. This a crazy sport in which anything can happen, but I don’t see that being the case here. Bermudez should cruise with ease.

Leites has suffered recently two losses, one against current champion, Michael Bisping by split decison, and against Gegard Mousasi by UD. The man standing across the cage from him, Camozzi, is riding an impressive 3 fight win streak.

Both men are talented strikers with a list of knockouts to their name. Leites may be on the opposite end of momentum in this one, but his experience outways Camozzi’s by a landslide. Camozzi has fallen each time he gets near the top, and history tends to repeat itself. Leites is hungry for a win and I think his experience will prove to be too much.

Cummings is one of those fighters that really has a great balance of everything. He can strike, grapple, and pull off submissions. He has been in the cage with the likes of Tim Kennedy and even fought at 205 (by the way, this is a welterweight bout). He is coming off of back to back decision wins and looks to carry on the momentum. Ponzinibbio, however, is coming off of back to back wins of his own, the only difference being both by TKO.

Ponzinibbio is a more comfortable fighter in the weight class and has settled in better. I think the youth and striking ability of Ponzinibbio gets the job done here against the scrapper, Zak Cummings.

Undefeated prospect Joseph Gigliotti is set to make his UFC debut against a tough alum in Trevor Smith. Smith is coming off a decision win over Dan Miller. Gigliotti on the other hand, is undefeated, with all of his wins having a good balance of KO/TKOs and submissions.

I like Gigliotti’s chances in this one and I think he could become on of the newest UFC’s freshest candidates for becoming a top prospect.

In her fourth fight for the promotion, Maryna Moroz takes on Denielle Taylor who is making her UFC debut. Taylor is riding a nice 2-fight finishing streak while her opponent, Moroz s coming off of a decision win. However, Moroz has been inside the octagon with competition like former title challenger, Valerie Letourneau. She also holds a submission win of top contender, Joanne Calderwood, handing her the first and only loss in her career thus far.

Moroz just seems to experienced to consider any real reasons why Taylor will win besides her finishing ability.