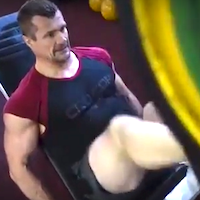 The 2006 Pride Open-Weight Grand Prix champion Mirko “Cro Cop” Filipovic (31-11-2, 1 NC) is in full training mode for his return to MMA action when he takes part in Rizin Fighting Federation‘s 16-man open-weight grand prix on Sept. 25 in Japan. The 41-year-old Croatian has been given a bye in the first round and will compete in the quarterfinals for his first bout. The knockout artist is looking pretty fit. Will he be able to capture glory once again in Japan like he did back in 2006? Pride never die.

Cro Cop last fought in April of last year when he knocked out Gabriel Gonzaga in a rematch at UFC Fight Night 64 in Poland. It was Cro Cop’s third knockout win in a row and sweet redemption for Gonzaga’s incredible head kick KO of Cro Cop at UFC 70 in April 2007.

Visit the Rizin website for more info on the upcoming tournament.