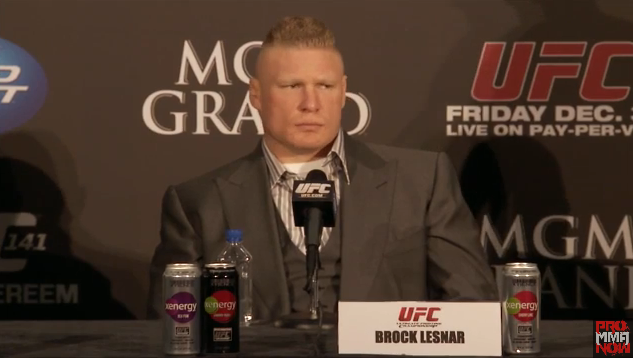 Former UFC heavyweight champion and current WWE superstar Brock Lesnar has long denied his Herculean physique was the result of steroids. He’s walked out of interviews for being questioned about it, and prior to UFC 200 he made the statement, “I’m a white boy that’s jacked. Deal with it.”

Now it has come to light that The Beast Incarnate failed (potentially) at least one of his five out-of-competition drug tests by USADA leading up to his July 9 bout with Mark Hunt at UFC 200. The drug test in question was taken by Lesnar on June 28 and the results came back just last night (Thursday). The banned substance was not named.

Unfortunately for Mark Hunt he was beaten by what appears to be a dirty fighter. In fact, the last three opponents Mark Hunt has faced have all failed drug tests: Antonio “Bigfoot” Silva, Frank Mir, and now Lesnar.

“It’s going to get worse, before it gets better” was what we were told when the new strict USADA drug testing guidelines were implemented by the UFC, and boy were they right.

At least Lesnar has another job to fall back on with the WWE and is scheduled to face Randy Orton at SummerSlam next month. However, for those fans hoping to see him return to the Octagon in the near future to make another run at the title, well, so much for that.

Here’s the full statement on Lesnar from the UFC:

“The UFC organization was notified today that the U.S. Anti-Doping Agency (USADA) has informed Brock Lesnar of a potential Anti-Doping Policy violation stemming from an out-of-competition sample collection on June 28, 2016. USADA received the testing results from the June 28, 2016 sample collection from the WADA-accredited UCLA Olympic Analytical Laboratory on the evening of July 14, 2016.

“USADA, the independent administrator of the UFC Anti-Doping Policy, will handle the results management and appropriate adjudication of this case. It is important to note that, under the UFC Anti-Doping Policy, there is a full fair legal review process that is afforded to all athletes before any sanctions are imposed. The Nevada State Athletic Commission also retains jurisdiction over this matter as the sample collection was performed in close proximity to Lesnar’s bout at UFC 200 in Las Vegas.

“Consistent with all previous potential anti-doping violations, additional information will be provided at the appropriate time as the process moves forward.”

Could this failed test by Lesnar be another case of the mysterious “tainted supplements” or does it just confirm what many have always suspected?