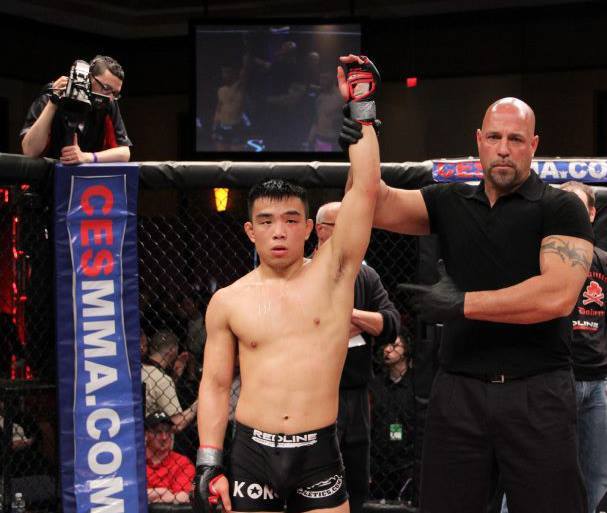 Before Kin “Kong” Moy fights Andre Soukhamthath in a rematch for Soukhamthath’s CES MMA Bantamweight Championship in the main event of CES MMA 37 on August 12 in Lincoln, R.I., live on AXS TV Fights, the hard-hitting Northeast fighter spoke with ProMMANow.com.

Why have you been so successful as a fighter?

I attribute my success to a combination of hard work, persistence, and good help. When I first walked into the gym, I was very overweight and people kind of laughed when I said that I wanted to fight. They told me I’d have to lose a few pounds before it could even be considered. So that’s what I did. Growing up, I’d always been one of those unmotivated kids who never really finished anything. I’d set out to try this or that and I’d always end up quitting. I used to dream of being a comic book artist and I even went to Boston Arts Academy, but got kicked out for not keeping up in my studies. MMA was the first thing I ever committed myself to and saw through to its completion. I never thought I’d actually become an ammy fighter, much less a pro, but I kept showing up to the gym and working hard until I was light enough to compete. I tried a NAGA and lost, then tried a kickboxing match and lost. Despite the outcome, my coaches were impressed with my effort and dedication so they decided to let me take a crack at MMA. Cage fighting was a bit more up my ally and before long, I racked up a few wins and starting working my way up the amateur ranks. Each and every fight, I work hard leading up to it and work hard afterwards to become better. Despite setbacks, I’m always determined to keep moving forward, and I’ve got excellent coaches and teammates behind me. So yeah, hard work, persistence, and good help.

How important is it for you to finish your opponents?

Finishing fights is very important to me. I dislike leaving things in the hands of the judges and I often feel that — because of the unpredictable nature of a fight — you don’t really know who won unless it was finished. My win against Andre is my only decision victory, and I’m not going to lie, it does nag at me sometimes.

Why were you unable to finish Andre in the first fight?

There are a few reasons why I couldn’t finish Andre before. First of which is that he’s skillful, tough, and has heart. If not for that, I definitely would have ended the fight within 15 minutes. Secondly, I made a few mistakes and kept trying to force submissions that weren’t there when I should have been punching. And finally, I ran out of time. In the last 3 seconds of the final round, I latched on a tight guillotine that was under the neck, but the bell rang right as I dropped for it.

Will you finish him at CES 37?

I do anticipate finishing Andre this time. I’m a different fighter now. I’ve grown wiser from experience and I’ve become less conservative in pushing the pace. The way I fight nowadays, I set such a blistering pace that someone is definitely getting finished before the final bell. Most guys can’t keep up with me, so that ‘someone’ is usually my opponent. Plus, for this fight, I get an extra 10 minutes to make that happen!

What does fighting for this championship mean to you?

Fighting for a championship — especially the CES MMA championship — means the world to me! This is the biggest promotion on the northeast and it’ll be televised! I’ve been in this game for 9 years and I’ve gradually working my way to the top of the bantamweight heap in New England. Unlike the common trend these days, I’ve consistently fought tough competition. I’ve walked away with an L a couple of times, but I’ve mostly come out on top. To be fighting for the belt, and winning it, will be the completion of a journey for me. Going from a 185 lbs couch potato to the CES 135 lbs champ will solidify for me, that I am no longer the lazy art-school flunk I’ve spent most of my life being; taking that title will cement my legacy in New England; and finishing Andre (who’s never been finished) as my third straight stoppage will open up doors for me to fight in the UFC. This fight is everything to me.

Does fighting for a championship change anything in the way you approach a fight?

In regards to my training, I’ve always worked hard but now I am trying to work smart. I’m making sure that every moment I’m in the gym, I am training in a way that will directly benefit this specific match. Everything I do has a purpose now; I’m not training my general MMA skills, I am training to defeat the Champion, Andre Soukhamthath.

How will it feel to be the CES MMA Bantamweight Champion?

I don’t know how it will feel to be the champion, but I can’t wait to find out!