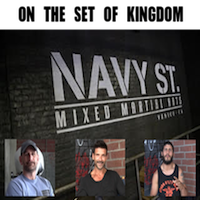 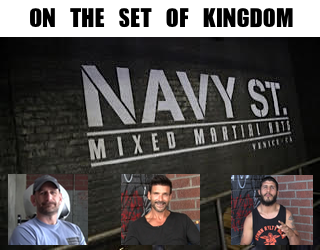 “In societies where modern conditions of production prevail, all of life presents itself as an immense accumulation of staged spectacles.” -Guy Debord, The Society of the Spectacle

Pro MMA Now contributor and friend Phantom Street Artist recently got the chance to visit the set of KINGDOM which just entered its newest season on Audience Network (exclusive to DIRECTV and AT&T U-verse platforms).

The series gives an inside look at the world of mixed martial arts centered around Navy St. MMA gym owned by Frank Grillo‘s character Alvey Kulina. Grillo has two sons on the show who he helps train and they are played by pop sensation Nick Jonas and Jonathan Tucker, who you may know from The Texas Chainsaw Massacre remake.

The dramatic television series provides a realistic look at the sport and culture of MMA, and to make the show as authentic as possible the creators brought on longtime veteran and former UFC lightweight title contender Joe “Daddy” Stevenson, as well as the most respected and winningest coach in the game, Greg Jackson, to serve as technical advisors and help put the actors through rigorous MMA training regimens.

Phantom Street Artist got to take photos of the set and sit down with Jackson, Grillo and Joe “Daddy” one-by-one to find out more about the process of taking “the cage to the stage” and how MMA itself relies on spectacle and entertainment to further its cause as the sport anyone anywhere can understand as it continues to gain popularity worldwide.

Frank Grillo was selected to provide our audience with a comparative analysis, a bridge between spectacle, theater and the fight world. The Fighter “Daddy” Joe Stevenson was chosen because of his experience as a professional fighter who began his career in 1999. Stevenson knows that there’s nothing more REAL than MMA. No other sport offers the vivid, raw and exhilarating experience for fans and realness than cage fighting.

Mentor Sensei Greg Jackson was the final selection, the great Coach was interviewed for providing guidance through his didactic enlightenment revealing that it’s strategy, not tactics, which is the ultimate key to our victories in the cage or our stage of life. The difference is well known through its epistemological study of the combative arts in the reference of military history as an intellectual study of war. Jackson teaches that final resolve is strategy with its overall plan, like form to function while tactics are the specifics used to achieve one’s goal. Without a true cause, the warrior will never achieve victory in one’s theater without selecting its heir strategy.

Our critique as its points of departure referenced a post situationist theory which represented an attempt to synthesize the comprehensive critique of the combative arts staged during our 21st century.

Our society of spectacle has arrived in the fight world with such sensational fighters as Mystic Mac. Its politics of spectacle is inherent in today’s political arena with American Presidential Candidates and now Hollywood when thy Kingdom comes.

The phenomenal rise of the fight movement and its culture can best be understood through Dean MacCannell’s literary classic “Touristic Consciousness” which argues as a premise that, “The concern of modems for the shallowness of their lives and inauthenticity of their existence” provokes one to search for authenticity.

The counterpoint to one’s age of hyper-reality and its dissociative simulacra is offered through the combative arts to fight. The combative arts utterly disorients the individual. The combative arts challenges and compels a new age of being by unraveling our understanding of ourselves within our environment and its surroundings by dismantling one’s points of physical reference and resistance.

And it is only in these byways of confusion and disorientation, that the bewildering event of radical ontological transformation with its personal transcendence can occur. The warrior within us all can finally be born. In an age of deception and delusion, somewhere between the gaps of language and expression through the study of its lone warrior can we return to ultimately finding ourselves.