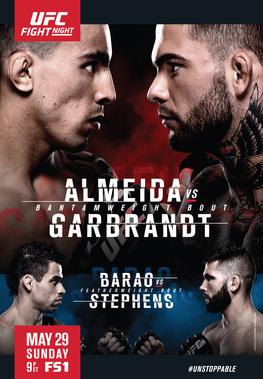 UFC Fight Night 88 takes place Sunday, May 29 from Mandalay Bay Events Center in Las Vegas. The event is headlined with a bantamweight matchup between two unbeaten fighters as Team Alpha Male’s Cody Garbrandt (8-0) looks to break into the Top 10 with a win over No. 7 ranked Thomas Almeida (21-0). Both guys pack power as Garbrandt has finished seven of his eight fights via knockout, and Almeida has finished 16 of his 21 fights via knockout. Almeida is the favorite according to oddsmakers, but not by much.

There’s a handful of interesting matchups on this card and most of the lines are pretty close with fights that could go either way due to the dynamic finishing capabilities of the fighters involved.

Sterling is the biggest favorite on the card at -400, with Caraway being the underdog at +325. Caraway is not a fan favorite and that seems largely due to his being Miesha Tate’s significant other (jealousy?) and his feud with Ronda Rousey which played out in front of everyone’s eyes when she and Miesha coached The Ultimate Fighter. That’s unfortunate because he’s actually really good and has finished 17 of his 20 wins via submission. Sterling is a purple belt in BJJ under Matt Serra and has six submission wins to his credit, as well as three by knockout.

It doesn’t appear Sterling has faced anyone with the submission chops of Caraway and if it goes to the ground Caraway could take advantage of a scramble and show Sterling who’s boss. Of course, anything can happen in a fight but if we were to bet on just one fight it would be that one — and the payout would be pretty sweet!

If you are one who likes to wager on MMA or other sports check out 10bet for all your needs.