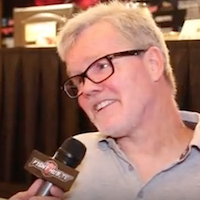 Legendary boxing trainer Freddie Roach was asked if he would lend a hand to help train UFC featherweight champion Conor McGregor if the rumored bout between he and Floyd Mayweather were to come to fruition.

“They asked me about training McGregor this morning,” Roach said. “If he comes, he comes. I’ll help him. I like helping people. But I’m not going to train him to fight Mayweather!”

“I’d have to train him for at least three years to get him ready for Mayweather,” he continued. … “He’s a little green, come on. I mean he’s good at MMA but boxing, I don’t know. ”

1 thought on “Freddie Roach on training Conor McGregor: ‘I’d have to train him at least 3 years to get him ready for Mayweather’”