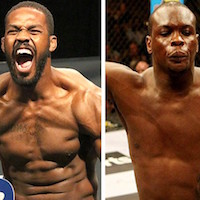 Jon Jones faces late replacement Ovince Saint Preux on April 23 in the UFC 197 main event from Las Vegas for the interim light heavyweight title. This is Jones’s first fight back since his legal woes. He looks strong and pissed but hasn’t been in the Octagon since Jan. 2015 when he successfully defended his title against Daniel Cormier. Ovince has fought three times since Jones last fought, most recently winning a unanimous decision over Rafael “Feijao” Cavalcante in February. Will the ring rust hurt Jones and can OSP shock the world? Check out this fan-made promo video that has us hyped! The highlights of Jones’s destruction of Glover Teixeira in this video is worth the watch alone.