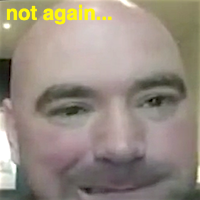 Former UFC light heavyweight champion Jon “Bones” Jones was involved in an alleged drag racing incident last week while he’s still on probation for a felony hit-and-run from last year. During the traffic stop Jones denied the allegations and became quite vulgar with the officer.

After a couple of days in jail this week, Jones today was able to strike a plea deal and remains a free man.

However, UFC President Dana White has some thoughts on the subject as you might imagine. He says he still hasn’t spoken to Jones but condemned him getting lippy with the police officer that pulled him over.

“I haven’t talked to him obviously. He’s been a little tied up since that happened,” White said during an interview with TMZ on Thursday. “Let me tell you what. When I get pulled over by the police I’m the most polite human being you’ve ever met in your life. There’s no upside to talking back to the police. It’s the dumbest thing you can ever do, especially if you’re in Jon Jones’s position.”

White was then asked if he thinks Jones can turn it around and stay out of trouble and “be the Jon Jones everyone wants him to be”.

“I don’t think Jon Jones is ever going to be the Jon Jones people expect him to be,” White responded. “I think Jon is going to do Jon. I think Jon tried so hard to play the good guy for so long it drove him crazy and Jon is just going to be Jon now.”

Jones is set to face Daniel Cormier at UFC 197 on April 23 in a rematch for the light heavyweight championship he never officially lost.