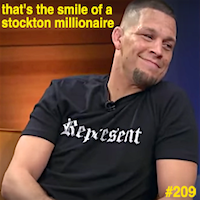 Nate Diaz joined UFC Tonight on Wednesday to discuss his recent win over Conor McGregor at UFC 196 and what he thinks about a rematch with the Irishman that is being rumored for UFC 200. Diaz calls the championship belt a “fairy tale” and knows the real winner in prize fighting is the guy cashing the biggest checks. Nate also weighs in on the return of his brother Nick Diaz whose suspension for the marijuana is soon to be up.

Nate also answers questions from fans about who he’d most like to fight at UFC 200, letting McGregor train with him, his role models, what he’s learned from martial arts and whether or not he would ever fight his brother Nick.