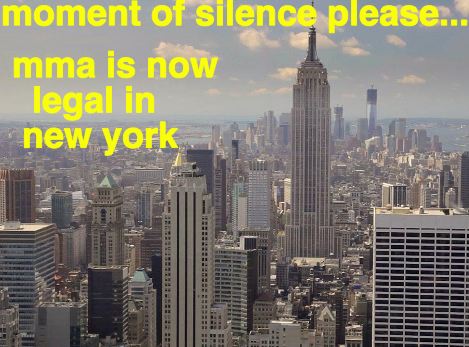 New York, New York, big city of dreams. Everything in New York ain’t always what it seems except on Tuesday, March 22, 2016, the final state in the Union to hold out on the legalization of professional mixed martial arts finally gave in. There was overwhelming bipartisan support in the New York State Assembly as the A.2604-C bill to legalize and regulate professional MMA passed 113-25. No problem.

UFC Chairman and CEO Lorenzo Fertitta applauded the news. “New York’s amazing arenas – upstate and downstate – have worked with us to advocate passage of this bill. So, too, have restaurants, hotels, businesses and others who recognize the economic value professional MMA can bring to New York,” Fertitta said.

“Our athletes have been extraordinary. More than 20 have been to Albany to help educate legislators about the fastest growing sport in the world,” Lorenzo continued. “And our fans have been phenomenal. Through letters and phone calls, rallies and social media, New York’s MMA and UFC fans have lent their voices of support. It took a while, but their voices have been heard.”

The UFC has committed to at least four shows per year for the next three years in New York state. Aside from hosting events from fight mecca Madison Square Garden in NYC, the organization has also named Buffalo, Rochester, Syracuse, Utica, Albany and Brooklyn as future destinations.

Once the gov’ner signs the bill and the sanctioning body for MMA is put in place via the athletic commission, then it’s off to the races for a state once known for its progressiveness. Somehow through all the money, lobbyists, gangsters, politicians, egos and unions enough palms got greased and enough dinners and plane rides were had by old men in suits that this shit got done. For that we can be grateful.