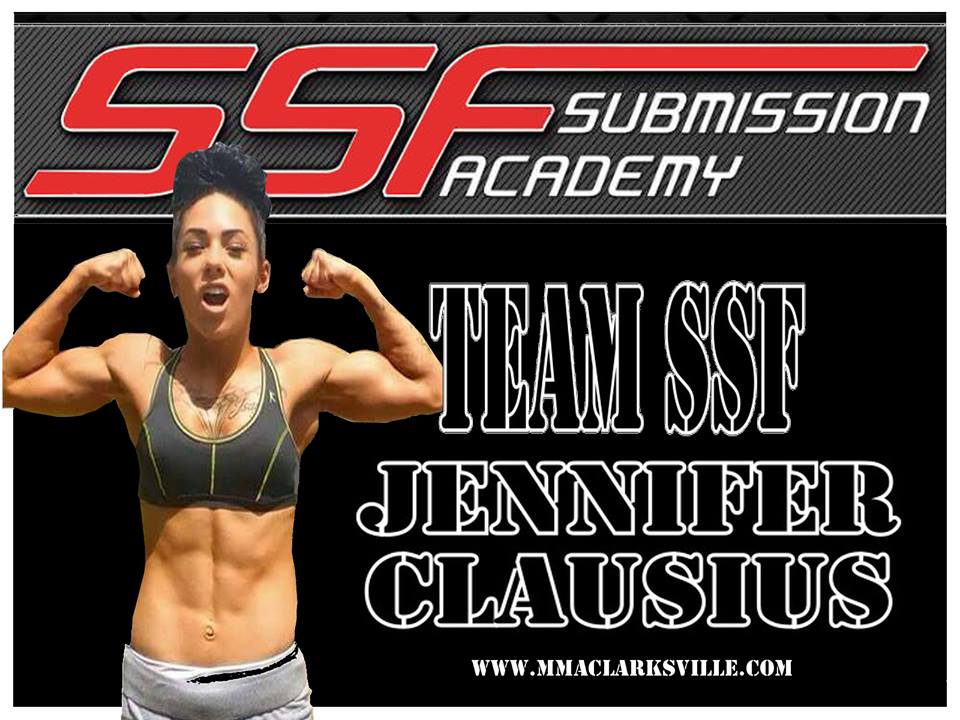 In this week’s Prospect Watch we talk with a young strawweight out of Middle Tennessee making a name for herself in the amateur ranks. At only 22, Jennifer “Macho Miss Jenny Savage” Clausius is showing some real progression and has her mind set on taking the 115-pound women’s division over. Coming off back-to-back wins, Clausius is expected to return to action in April for Hardrock MMA in a title contender bout.

Where are you from?

How long have you been training for MMA?

Ive been training since January 2014 and began fighting later on that year, around the Summer time .

What made you get into MMA?

A few things made me consider training and fighting. Growing up I was always bullied by the other kids and had it bad at home. I remember being 10 with my grandfather riding past SSF wishing and dreaming I’d train there to learn “karate” but my grandfather told me I was too pretty to mess up my face. Back in October of 2012, I was robbed by a group of people and couldn’t defend myself at all. That fear made me even more conscious to the dangers in the world around me, I became depressed and paranoid. I was only 19 at the time with a 3-year-old living on my own, and it took me a while to trust new people. I spent some time with Chance Wilson, a friend from my high school wrestling team who brought me around my old school mate and now my boyfriend of almost three years (Adrian Thomas). Watching them enjoy the sport made me anxious to learn. Since the day Adrian taught me how to wrap my hands, it’s been pure love.

How did you get your nickname and who gave it to you?

I grew up seeing Macho Man Randy Savage in the Slim Jim commercials, in the interviews with Mean Gene and hearing his voice in my favorite cartoons. I always loved his energy and tenacity. He made me feel like a champion just by watching him. Adrian had jokingly said that he was the Ultimate Warrior and I was Randy Savage and together we were the Ultimate Maniacs! I switched my name around his and came up with The Macho Miss Jenny Savage .

What is your current record?

Being a female fighter, what do you think of the use of sex to sell fights?

I think it’s under the discretion of the fighter. Before I began training, a year prior I started modeling. Ive always tried to promote myself as a mysterious and sexy vixen. When I had my first cage fight, however, I noticed all of the little girls who had asked for autographs and pictures. I felt guilty and that I had a responsibility to live by and that is removing the sexual aspect in WMMA away from my image as a fighter. I want to be for the kids. I know that when I make it there will be offers to pose in sexy MMA shots but you can’t buy dignity and self respect. This is a new age for women fighters and we need the respect we deserve with our clothes on.

I hear you are a single mom, how does that play into your training?

Cayden is 6-years-old, though I had him young I thrive to be the influence that I always needed growing up. He’s is the sole reason I train as hard as I do. Before my first show he squeezed me and said that I was his favorite super hero and how he wanted to be strong like me. Cayden participates in the kid’s youth class and has since learned the basics of wrestling. During the day I work until he get home from school, we go train and do it all over again the next day .

You are known as a striker, what is your favorite combo?

I’m a southpaw so I usually have the upper hand when it comes to stand up. I love any combo that sets up a kick so pretty much all of them!

Ron Dayley tells me that you have been taking BJJ and MMA classes, what is your favorite submission and what is your rank?

I am currently a white belt. My favorite submission is the RNC because I feel I defend and submit with the best of them.

Who is your biggest inspiration in MMA?

My biggest inspiration is my past. Seeing how far I’ve come already has given me the hunger and the drive to reach the top.

What team do you train with?

Do you like to stand with your opponent or take the fight to the ground?

Latley I’ve been a defensive fighter that likes to take control after my opponent makes their move. With every fight I develop a new style or mindset so I’m always changing .

What does being a fighter mean to you?

It’s the ultimate meaning or example of being a survivor. That meaning gives you the power to get back up when life beats you down only to come back stronger, and harder to kill.

If you could have one dream fight who would you fight?

My dream fight would be with anyone who stands in my way as the strawweight champion. I want to take them all out one by one .

Who is your toughest fight to date?

My toughest has yet to be fought.

Who are you fighting next?

Hopefully I’ll be fighting on Hard Rock MMA in April.

What do you want to be remembered for at the end of your career?

I want to be great. I want to be remembered for my tenacity and how I never give up, win or lose. I want people to remember me mostly as a reason to chase their dreams.

What has been your biggest accomplishment in the sport so far?

I don’t have any accomplishments other than my wins but I can say I’ve got a mean double leg takedown I’m super proud of.

Who has been most influential to you in your career?

Adrian Thomas is by far the most influential person in my life. I’d be nothing without his heart and mind.

How would you describe your fighting style?

Im a southpaw and I use it to my advantage.

What drives or motivates you?

Giving my mom a house and a car of her choice .

What do you like to do in your free time?

I love sleeping, no exaggeration. I work eight hours a day doing construction and the rest training. When I find some off time, I meditate and do yoga … which turns into a nap. Namaste, haha.

What advice can you give to young fighters and those who want to become fighters?

Take your time and train, don’t worry about the fights because they will find you. I think the most important martial art is wrestling so I’d advise any high-schoolers to start there because it is the best base to start.

Is there anyone you want to thank or give a shout out to?

I want to thank Ron Dayley for allowing me to be apart of the family. He’s done so much taking me under his wing that I’d be lost without this opportunity he has given me, he’s an awesome coach, a great mentor and the coolest dude I’ve ever met! I want to thank my mom for raising me into the tough woman I am today and most of all I can’t give enough thanks to Jesus Christ and His Heavenly Father for guiding me teaching me something new everyday.

Follow Jennifer on Twitter @_jennifersbody_ then watch Miss Macho in action in her fight against Angie Paul at Absolute Action 43: