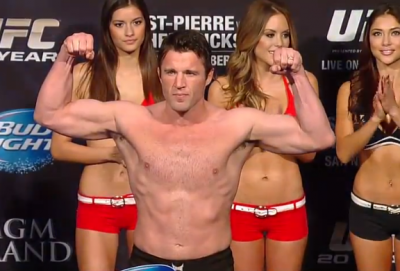 Submission radio recently spoke with “The Bad Guy” Chael Sonnen about a possible UFC return. Sonnen tested positive for banned substances and was subsequently harshly suspended from competition. Still, the talk of a return seems to surface every few months, but he was having none of it.

Well I would tell you this, [my manager] does believe that. He argues with me all the time, and it’s very playful, but he just tells it – I always tell him, ‘man my race is ran and I’m done,’ and he says, ‘yeah I don’t believe you. I think you’re going to come back. I know you’re in the gym, and blah blah blah’. So he is sharing his opinion. The only push back I would give is that he said “for the right fight”. Man, I’m not a bully, I’m not coming in to fight some dinosaur like, you know, Vitor, Rich Franklin. If I come back, I’m gonna whip all their asses – and I’m not coming back, but if I did, it wouldn’t be for the “right” fight. I would come back and fight anybody that fought me.

A fight with Franklin or Vitor has excited fans, but are those past their expiration dates? What do you think?