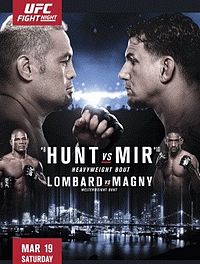 The UFC train will get back on the tracks this week with the UFC Fight Night 85 fight card that’s set to take place in the Brisbane Entertainment Centre in Brisbane, Australia. The event will be headlined by the heavyweight showdown between Mark Hunt and former UFC heavyweight champion Frank Mir.

The co-main event will feature a welterweight bout between TUF alum Neil Magny and former Bellator champion Hector Lombard who’s returning from a year long suspension due to a failed drug test at UFC 182.