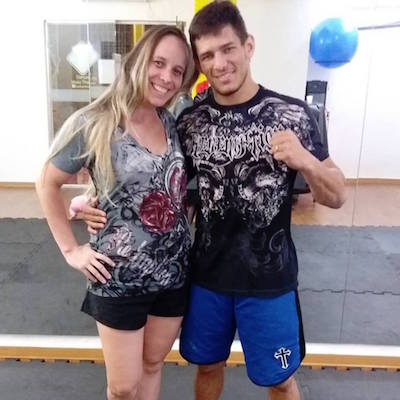 Titan FC 37 took place Friday, March 4 in Ridgefield, Wash. The event streamed live on UFC Fight Pass and was headlined with what would have been a bantamweight title fight between Anderson “Berinja” dos Santos (14-3) and Ricky Simon (7-1), but due to the short notice “Berinja” was not able to make weight and the title remains vacant. “Berinja” scored a come-from-behind rear-naked choke submission in the second round and we caught up with him after the fight to get his thoughts.

You took the Titan fight on 15 days notice, could you please explain what you had to do to get ready for such a big fight on short notice?

I was not training, I was stopped since December and had gone back to work to take care of my family. When I got the call to fight for Titan FC, I only had time to train cardio and start my weight cut. When, I get time to do a full camp (6 week), you will see a much more powerful and aggressive fighter.

This was the first time you fought in USA, how was it with international travel and fighting?

The trip was very long and uncomfortable. I even missed one of my flights. I was either in the air, or in the airport for 22 hours.

You fought the main event for Titan, Ricky Simon came out very aggressive , what were your thoughts on the first round?

Simon came very aggressive in the first round. I knew he was going to come out and try to finish the fight early. I used my experience and kept my strategy. I know I have the heavier hands for the bantamweight division and I know in this weight class when I land a big strike, my opponent is going to go down.

You ended up catching him in a rear-naked choke, could you explain how you got him in that position?

What is your next fight?

I am back in Brazil now, and waiting for Titan FC to call. I will be ready, with a full camp I can compete against any bantamweight.

Berinja was on our Pro MMA Now prospect watch list last month and now you know why. This 30-year-old Chute Boxe product is on the verge of the big show and with a proper training camp under his belt is a real force at bantamweight.