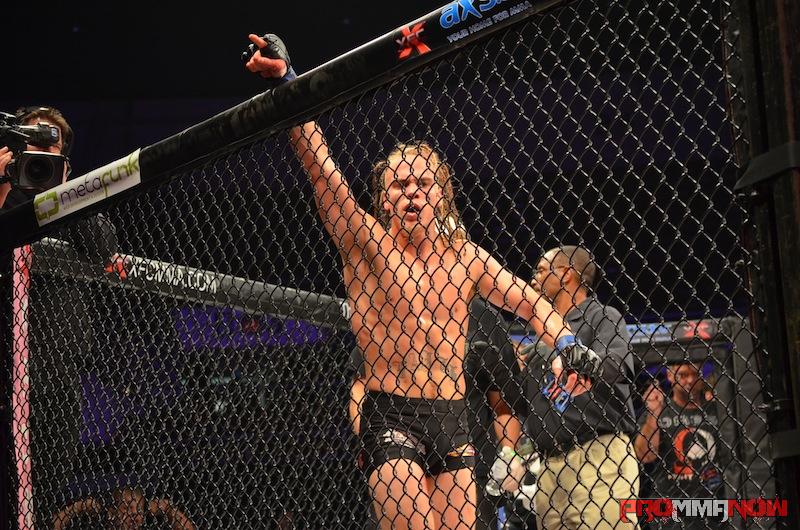 Clarksville, Tennessee’s Nate “The Train” Landwehr (6-2) will return to action in his hometown on March 12th when he faces UFC vet Diego “The Octopus” Saraiva (22-19-1) in a featherweight headliner for A&A Fight Time Promotions’ “A Night of Explosions” at Austin Peay State University.

Landwehr is an aggressive in-your-face pressure fighter who was previously signed to a contract with XFC before they stopped promoting fights in the U.S. The 27-year-old Scientific Street Fighting product went 3-1 inside the XFC, scoring knockout wins over Keith Richardson, Chris Wright and Billy Mullins. “The Train” derailed Adam Townsend for the 3FC Featherweight Title in Feb. 2014 and has been paying his dues on the regional circuit waiting for the call up. After having a three-fight winning streak snapped by Mark Cherico this past October, Landwehr has devoted himself full-time to training and is ready to live out his full potential as a professional mixed martial arts fighter.

Ray Stevens caught up with Nate for us before his upcoming fight as a refresher to those who have been wondering what’s up with “The Train” and as an introduction if you haven’t yet got on board. All aboard!

Where are you from?
Clarksville, Tenn.

How long have you been training for MMA?
6 years.

What made you get into MMA?
I saw a fight on TV and knew I could beat them. So I told my college track coach I was done running track.

How did you get your nickname and who gave it to you?
My buddy AC. I got it off the streets because I ran through mf’ers and in football.

What is your current record?
6-2

I’ve heard that you have been taking BJJ classes, what is your favorite submission?
Anaconda.

Who is your biggest inspiration in MMA?
My support team and fans.

What team do you train with?
SSF and Angel Natal.

What does being a fighter mean to you?
It gives me the potential to be the person I want to be, and the person I dream to become. To go from being one out of many to being that one that made it.

If I was Dana White, why should I look at you?
Because I’d help him clear out the division.

If you could have one dream fight who would you fight?
Whoever for a big payday.

Who are you fighting next?
Diego “The Octopus” Saraiva.

What do you want to be remembered for at the end of your career?
It doesn’t really matter as long as I’m rich and recognized.

How would you describe your fighting style?
In your face, balls to the wall.

What drives or motivates you?
The goals I’ve set for myself.

What advice can you give to young fighters and those who want to become fighters?
Do what you need to do and never take no for an answer. The only respect you will ever need is self respect.

What do you think makes you different than other fighters in your weight class?
I’m more exciting and I can end a fight with one punch.

Do people recognize you when you travel or in your hometown?
Yep, most definitely.

Is there anyone you want to thank or give a shout out to?
My wife and family, my coach Angel (cardio) who’s up early training me everyday morning or night, my coach Mike Merriman (MMA), coach Jay Martin (BJJ), my team SSF and always my sponsors who help make training full time possible- Martins Quality Painting, Anytime Fitness of Tiny Town, The Stable, Damage Control Mouthguards, Jim Heisinger Tree Service, and Keith at Section 125, and a shout out to my hometown Clarksville.