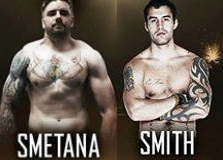 Devon “Mr. Boomtruck” Smith (3-1) will seek to entertain his home crowd Saskatchewan fans when he welcomes West Virginia fighter Keith “The Banana” Smetana (10-6, 1 NC) to the cage at Prestige FC 2 on March 12th at The Orr Centre in Regina. The two started out going at each other on social media, but they’ve taken it up a notch with this Vlog Battle as they train and prepare for their middleweight showdown. Neither guy has ever let it go to the judges’ scorecards if that tells you anything. Here’s Round 1.

Check back next week for Round 2!