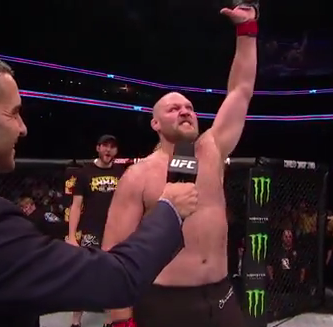 During an interview on UFC Tonight on Wednesday UFC heavyweight champ Fabricio Werdum (20-5-1) shared his thoughts on Ben Rothwell (36-9) potentially being in line for a title shot. Rothwell is coming off a first round submission of Josh Barnett last week, becoming the first person to ever submit the former heavyweight champion. Despite the impressive win for Rothwell, his fourth straight finish, Werdum doesn’t think the 34-year-old Wisconsin native is quite ready for a shot at heavyweight gold.

“I don’t see [him] as a contender now. He wanna show a little bit more,” said Werdum. “The choke… he’s heavy man… I think he have gift [with] this choke. He’s a big guy, a heavy guy, but I don’t think he’s in line just yet. A good win for sure, congratulations for him, but not yet.”

Werdum was supposed to have a rematch with Cain Velasquez on this weekend’s UFC Fight Night 82 card, but is now expected to face Stipe Miocic in May. Currently ranked No. 5, Rothwell is right there in the mix and could find himself challenging for the title by year’s end.