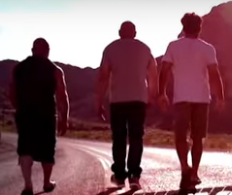 The Three Amigos are back with another episode of Lookin’ For a Fight as UFC President Dana White, his pal Nick “The Tooth” Gullo and former welterweight champ Matt Serra all travel to Alaska to check out the MMA scene and scout talent at an Alaska Fighting Championship event. Serra takes time to instruct a prospect on a mistake that cost him his fight and maybe a UFC contract. The guys do some paddleboarding in Subartic waters, “The Tooth” rides a surfboard like a wakeboard, they go dog racing with an Iditarod champion, and Matt and Nick battle it out on the mats.