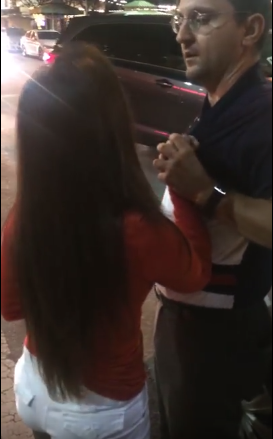 An Uber driver was attacked by a drunken young woman in Florida for not allowing her to ride in his car. The woman then proceeded to yell and destroy his car while taunting him to call the 911. Check the video below:

The women is apparently a fourth year neurology resident in Florida that just had too much alcohol or something. I must admit the guy showed a lot of restraint with the woman. She got physical with him, and after holding her wrists for a while he did sort of sling her to the ground to try and leave the scene. It was at that point that she got inside the car and proceeded to trash it, throwing things all over the pavement. It took forever for the police to get there apparently, maybe he should have called Ronda Rousey or Holly Holm to assist with the situation since he really couldn’t do much because he was dealing with a female?

Props to him for keeping cool.