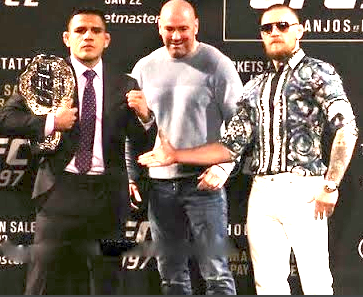 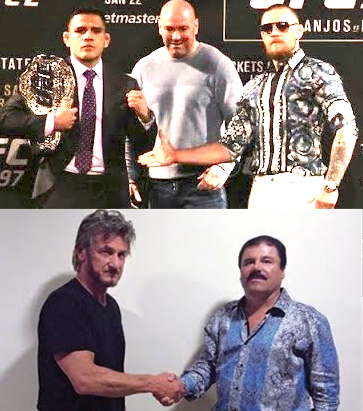 During the UFC 197 kickoff presser earlier this week UFC featherweight champ Conor McGregor showed up looking like he rolled off a Miami yacht smoking one of Cuba’s finest. After comparing himself to Mexican drug lord Juaquin “El Chapo” Guzman and referring to himself as “half a wise guy” during the press conference, McGregor struck a pose during his staredown with Rafael dos Anjos reminiscent of the infamous meeting “El Chapo” had with actor Sean Penn. Dos Anjos surely didn’t get the reference and refused to shake Conor’s hand.

Keeping up with The Guzman's. pic.twitter.com/dOkrVpU4yI

Do you think Conor’s ego is getting out of control, or is the Lamborghini driving, Rolex wearing Irish superstar just having fun and enjoying the ride?

Conor McGregor will challenge Rafael dos Anjos for his lightweight title in the UFC 197 headliner on March 5 in Las Vegas. Holly Holm defends her bantamweight title against Miesha Tate in the co-main event.