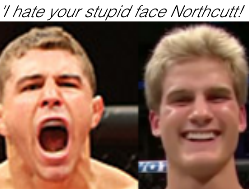 Sage Northcutt (7-0) currently attends Texas A&M University where he studies Petroleum Engineering. The 19-year-old Katy, Texas native was also “discovered” by UFC President Dana White putting on a remarkable performance in Legacy FC before signing with the UFC last year. And they captured the whole thing on tape to kick off a new UFC web series, “Dana White: Looking for a Fight”.

A Taekwondo black belt and BJJ purple belt, Northcutt has gone 2-0 inside the Octagon at 155-pounds and is now moving up to 170 pounds to face Bryan Barberena in New Jersey at the end of the month — and he’s making more money than some established veterans who’ve been with the UFC much longer. Guys like No. 10 ranked Al Iaquinta, who is coming off his ninth fight with the promotion where he made $23,000 to show and $23,000 to win.

Northcutt fought in Texas in his UFC debut last October and the athletic commission there doesn’t release the salaries to the public. But in Northcutt’s second UFC appearance this past December, he earned $40,000 to show and another $40,000 for his second round submission win over Cody Pfister. That’s $80,000 if you’re counting; nearly twice as much as Iaquinta took home in his last outing.

It’s understandable then why guys like “Raging” Al Iaquinta might be a little salty at all the love the Opie Taylor–Ken doll love child is getting. Al raged a bit on Twitter.

What goes through my head every time I hear the fucking Sage Northcutt speak https://t.co/29tIUMZDPb

30 seconds of my life that I will never have back pic.twitter.com/YOdjQMGUOD

Message I got from the fucking Sage Northcutt after I roasted him last tweet and shoved him in a locker https://t.co/4T0MKJsziU — Al Iaquinta (@ALIAQUINTA) January 22, 2016

When asked on Twitter what his beef was with Sage, Iaquinta said he was always the guy who would sit in back of class and throw stuff at the “suck up superdorks in the front”.

And if Al can steal a bit of the kid’s shine and help build up a fight between these two in the process, even better, right?

If you forgot what Sage sounds like, take a look at his post-fight interview from December.