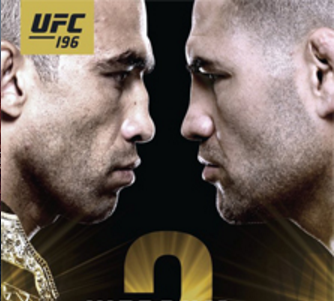 The UFC’s next pay-per-view event will be held Saturday, Feb. 6, as heavyweight champion Fabricio Werdum (20-5-1) puts his title on the line in a rematch against former champion Cain Velasquez (13-2) in the UFC 196 headliner from Las Vegas.

Werdum captured the title from Cain in June of last year in Mexico City by submitting the former NCAA Division I wrestler in the third round. The lack of proper preparation for the high altitude fight caused Velasquez, for the first time in his career, to show signs of cardio deficiency and Werdum was able to capitalize. Now that the rematch is in Vegas, we may be able to see just how much the altitude factored into their first encounter.

My Top Sportsbooks has Cain a 2/3 favorite, but at 38-years-old, Fabricio really does seem to be in his prime. His striking has evolved tremendously; his rangy kicks, boxing and Muay Thai have recently shut down the likes of Travis Browne and Mark Hunt and played a large part in his win over Cain.

Velasquez has a strong wrestling game, good boxing and some decent kicks. But he’s never submitted anyone and if he takes Fabricio down he puts himself at risk of getting submitted just like what happened in their first fight.

Cain is good with knees to the legs/body if he can press Werdum to the cage, but the Brazilian’s height makes it difficult for Cain to grab a Thai plum and land those big head shots with the knee. This is not the case with Werdum, he’s extremely dangerous with his knees and hurt Cain badly with them in their first fight.

Velasquez got battered in their first meeting, but yes, altitude definitely played a factor. Was it the only and most important factor? Probably not. Werdum is more well-rounded, that’s all there is to it. Cain has the power advantage and can definitely shut the lights out with the right shot, but Werdum has shown great durability with no signs of slowing down yet.