Should Urijah Faber get another title shot against Dominick Cruz? 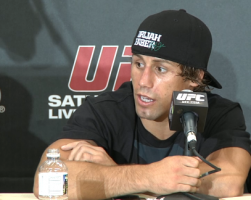 UFC bantamweight Urijah Faber feels like he should be next in line to face newly crowned champion Dominick Cruz after Cruz regained his title by defeating Faber’s former training partner TJ Dillashaw via split decision. The bout was highly contested with many people feeling as though Dillashaw did enough to keep the belt. However, Faber stated that he felt that he thought Cruz won the bout four rounds to one(which no one agrees with). Faber and Cruz have fought twice before with each fighter winning a fight a piece. Faber defeated Cruz via first round submission in 2007 at WEC 26 as featherweights.

“You’ve got to give it to him. What a journey he’s been on. He’s a real champion; he’s a true champion,” Faber said on Fox Sports 1. “He’s only lost to one team, that’s Team Alpha Male. He’s only lost to one guy and that’s me. I feel like I beat him the second time also.”

Cruz won a unanimous decision in 2011 at UFC 132 to defend his UFC bantamweight title against Faber.

“I connected to his chin. I know he feels like he’s hard to hit. I found his chin, his butt found the ground, and I’m gonna make that happen again,” Faber said. “Let’s do it Dom, it’s been a long time coming. I’ve been sticking around a couple extra years just to let you heal up, buddy. You’re not made for battle. Thank goodness you made it out of this thing, hopefully alive and hopefully the foot’s OK. Let’s do this.”

There is a built in storyline with the history between the two fighters. Faber has won three of his last four fights, but none of those wins have come against guys close to being ranked top 10. He has had five title fights since losing his WEC featherweight belt in 2008 and has lost all five fights, so it’s not exactly like he has earned the next shot against Cruz. He probably isn’t even thought about if not for their prior two fights and the potential for a rubbermatch.

Should Faber be given the rematch to complete the trilogy with Cruz, or should Dillashaw be given an immediate rematch since their bout on Sunday night was razor close?