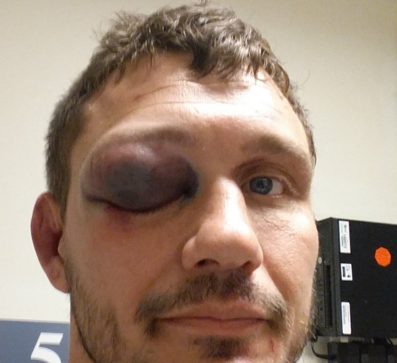 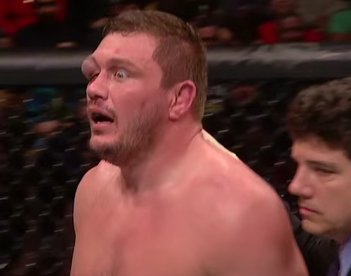 No matter how you look at it, this sucks. During Sunday night’s heavyweight tilt between Matt Mitrione and Travis Browne at UFC Fight Night 81 in Boston, “Meathead” took took two pokes to the eye and a big slam that damaged his shoulder — but it was a punch that swole his right eye up to the point it looked like a little alien Herb Dean could pop out at any moment… or possibly a little Conor McGregor leprachaun. Either way, it was bad and it eventually resulted in him getting TKO’d near the end of round three. Watch the video below to see how it happened.

Mitrione posted this photo to Twitter early Monday  morning saying he had a broken orbital. DAYYYYUM!!!

Broken orbital floor. This and the shoulder happened after the 2nd eye poke. I don't think they would've happened pic.twitter.com/wFn1NC3j5Y

Here’s to hoping Matt makes a full recovery. He had talked of possibly retiring if things didn’t go his way in Boston, and now with this injury, could this be the last time we see of the TUF 10 veteran in the Octagon?