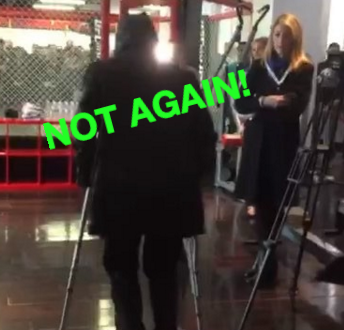 There are trolls and then there is just pure evil. Only someone with a sadistic nickname like “The Dominator” would show up to the UFC Fight Night Boston open workouts on crutches just to mess with our emotions. Dominick Cruz had to relinquish his bantamweight title in 2014 because he’d injured his leg and was out for so long. He made is comeback in September of that year, making quick work of Takeya Mizugaki. But then he hurt his other leg!

Now back in one piece, Cruz will finally get a chance to reclaim the 135-pound title he never lost on Sunday, Jan. 17, when he challenges champion TJ Dillashaw in the UFC Fight Night 81 main event live on Fox Sports 1. The crutches were just supposed to be a joke by Cruz, but sir, we don’t find that funny one little bit!