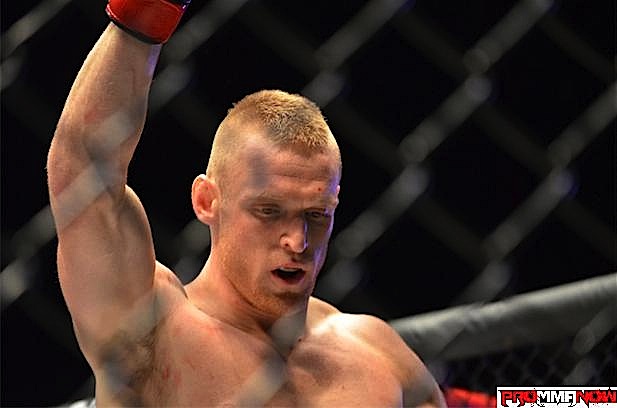 Unbeaten UFC lightweight Scott “Hot Sauce” Holtzman (8-0) returns to the Octagon this weekend for his sophomore UFC appearance as he takes on TUF 18 alum Drew Dober (15-7, 1 NC) at UFC 195. Holtzman, a 32-year-old Knoxville, Tennessee native, made a successful UFC debut in August in front of his home state crowd in Nashville with a third round rear-naked choke submission of Anthony Christodoulou (12-6). Now the former hockey player returns to action as he tries to remove the next obstacle in front of him as he climbs the 155-pound UFC lightweight ladder.

PMN: Hi Scott, thanks for taking time to answer a few questions before your upcoming fight. Were you back at the MMA Lab training for this one?

HOLTZMAN: Hey Jack, it’s good to hear from you, man. … I am back at the MMA Lab training for this one. I’ve been here probably for about eight weeks now, so I had a good jump start on a short-notice camp. But I was training before. I always train back in Tennessee at Shield Systems, so I kind of go back and forth. I’m always training though.

PMN: Efrain Escudero defeated Dober in June, and he’s one of your teammates at the MMA Lab. How much help was he for this camp?

HOLTZMAN: I watched the Efrain Escuedero-Dober fight. Supposedly Dober has really good submission defense but just got caught on that one. There wasn’t a whole lot to learn from that, but they did spend an entire camp preparing for Dober, so guys like Benson [Henderson] and some other guys around the camp had some experience watching Dober and helped him with him, so we have a good idea of what’s going on. And for me, I’m just going to be ready to fight everywhere wherever the fight goes. He’s good everywhere so just expecting everything.

PMN: Who were some of the other main guys you were working with for this fight?

HOLTZMAN: Benson Henderson, UFC light-welterweight, I’ll call him that. Brian Barbarena; UFC welterweight now, was a lightweight, he helped. David Michaud, Tim Welch. Drakkar Klose, he’ll be in the UFC eventually. There’s a ton of guys. Augusto “Toquinho” Mendes has helped me, he’s a jiu-jitsu world champion. And we have a whole list of guys really. We mix it up everyday on the mat, there’s a ton of guys, but those have been some of my main sparring partners.

Last day of camp for Scott Holtzman, ready to do his thing next weekend at UFC Las Vegas! pic.twitter.com/O2obQfmJQT

PMN: I find Drew Dober interesting because he comes from a Muay Thai background but most of his wins have been by submission. What’s your take on him and where he fits in the division?

HOLTZMAN: Yeah Drew Dober is interesting man. He’s a savvy veteran. I really think he’s a better fighter than what his UFC record shows. I know he’ll be in good shape, he’ll be tough, he’ll push forward and he’s good everywhere. I think being a good striker can open up submissions, so that may be why he has some submissions. I know that some of my submissions have come in the past from beating guys up and the submission popping open. I’m expecting the toughest fight of my career by far but I’m ready to go in there and let it rip.

PMN: Can you talk a little bit about why it took you so long to get a fight once signed with the UFC?

HOLTZMAN: Yeah it took so long to get a fight because I was on the sidelines with a hand injury. I had to have surgery. So that took a little while, it was a pretty invasive surgery and I wanted to let it heal properly. Luckily, Joe Silva and the UFC told me to wait and take as much time as I can and they didn’t rush me back, so I made sure it was healed properly and I’m glad I did, because it’s 100-percent and maybe even stronger than it was before, so it worked out really well for me. But I trained the whole time. I worked on other things besides using that hand so it was a great little rest period for me.

PMN: How are things in Knoxville and who do we need to keep an eye on coming out of East Tennessee?

HOLTZMAN: Yeah, things are going well in Knoxville. Our gym continues to grow, Shield Systems. We have some good local amateurs. The one you need to watch out for, he’s a lightweight, he’s making his pro debut in February, I believe in Chattanooga for Valor fights, I think. His name is Damir “The Bosnian Barncat” Ferhatbegovich. It’s kind of hard to pronounce but he’s been my training partner since I started I think. He was probably a 12-year-old kid [at the time], but he’s tough man. He could be in the UFC one day and I think he’s one of the hottest prospects in the country. There’s also another training partner of mine named Dylan Cala. He’s a 2-0 pro at 135. He’s out of Charlotte now, but he trains with my coach, Jeff Jimmo at Uncle Jeff’s Gym in Charlotte. I think those guys are the two biggest prospects in the Southeast and will both be in the UFC one day.

PMN: Did you get to work with Eric Turner and OSP and the guys at KMAA for this one too?

HOLTZMAN: No, I didn’t work with Eric and OSP any. You know, sometimes I go over there to help OSP with something, or to see the guys or things like that, but I didn’t go over there and work any.

PMN: You come from a hockey background. What was the most beneficial aspect of that sport that translated to MMA for you?

PMN: What’s your thoughts on “movement training” and do you practice any sort of “out-of-the-box” type training?

HOLTZMAN: I think movement training is a really big deal. I’ve actually been doing it for almost a year now before it’s kind of come mainstream. I have a guy out here in Arizona, Premier Fitness Systems. His name is Brandon [Harris]. We’ve been doing some movement for awhile now and it’s really made my body feel better overall and I’ve felt more loose and more fluid. I think it’s a big deal. But obviously, just like anything in MMA, it’s just a piece. You have to have a lot of pieces and a technical base and everything like that. Is it the only way to go? No. But does it help? Yes, big time.

PMN: What inspires you?

HOLTZMAN: I think what inspires me the most are when the fans tell me they like my fighting style or they love my fight, or they were a fan of me after the fight. I’m really big on doing my talking in the cage and putting on good performances. I put everything I have into those performances and the training camps leading up. And always, out of respect for the fans and my opponent and the game, I always come in good shape and I’m always out there fighting to finish and fighting to win. I feel like the fans [inspire me] more than anything.

PMN: Thank you Scott, best of luck on Jan. 2. Enjoy the holidays and some good food after the fight.

HOLTZMAN: Thanks for your time Jack, I really appreciate it. Let me know if you need anything else and we’ll talk to you soon.

Be sure to follow Scott on Twitter at @HotSauceHoltzy and then join us here at ProMMAnow.com this Saturday, Jan. 2, 2016 for UFC 195 live results and play-by-play commentary. Holtzman will be taking on Dober on the Fox Sports 1 prelims, and Robbie Lawler defends his welterweight title against Carlos Condit in the pay-per-view main event. The first fight kicks off at 6:30 p.m. ET.