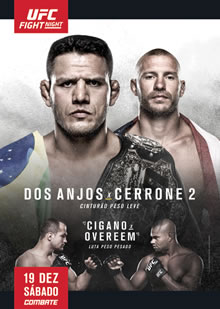 The UFC on FOX 17 event is set to take place Saturday, December 19, at the Amway Center in Orlando, Florida. It will be headlined by the UFC lightweight title fight between champion Rafael dos Anjos and challenger Donald “Cowboy” Cerrrone. The two fought back in 2013 with dos Anjos winning a unanimous decision.

The co-main event will feature a long awaited heavyweight clash between former champion Junior dos Santos and Alistair Overeem. Check out the UFC on FOX 17 “Road to the Octagon” in the player below as we go behind the scenes of the fighters and their training camps:

The preliminary fights will begin on UFC Fight Pass at 3:30 p.m. ET, and will then transition over to FOX Sports 1 at 5 p.m. ET. The main card will begin airing on FOX at 8 p.m. ET. Stay tuned to ProMMAnow.com for all of your UFC on FOX 17 news and coverage.