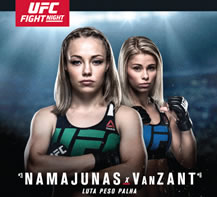 The Ultimate Fighting Championship begins their three-events-in-three-nights tonight with UFC Fight Night 80 from The Chelsea at The Cosmopolitan in Las Vegas. Strawweight standouts Rose Namajunas and Paige VanZant will clash in the headliner, Jim Miller faces Michael Chiesa in the co-headliner, and the UFC’s newest hype machine, Sage Northcutt, returns against Cody Pfister.

Round 2 – They exchange leg kicks. Santos lands a nice elbow and Theodorou scores a takedown. Santos back up but gets pressed to the cage by Elias, where he looks for the takedown. A few elbows from Santos halt the takedown attempt for now. But Elias still controls the clinch for a good length of time before the ref separates them. Santos landing some nice shots as Elias clinches up looking for the takedown again. One minute to go. Santos gets some distance for a couple seconds, then scores a takedown, lands a knee. Elias back up and gets a quick takedown of his own before the bell. 10-9 Santos.

Round 3 – Elias back searching for the takedown. Santos lands a knee as Elias shoots in. Elias continues to grapple and look for the takedown and he eats some elbows that cut him over they right eye pretty badly. Sanots hurts him with punches and a high kick, but Elias looks for the desperation takedown, pressing Santos to the cage again. 90 seconds left. Knee to the body from Santos. Another, and another. Elias takes a finger in the eye and a brief time is called. Elias shoots, eats a big knee to the face. Santos smells blood and lands a huge body kick. Somehow Elias survives. 10-9 Santos. Elias is a tough S.O.B. He took some big shots in this last round.

Round 1 – Pfister comes out aggressive and takes Sage down right away. Sage has submissions. Right now he has Cody tied up tight and Cody is unable to get anything going. Cody gets to half guard and lands a couple short elbows/punches. Sage recovers full guard. Cody gets to half guard briefly, then it’s back to full guard. Cody staying busy but this ref still stands them up and the crowd boos. Sage with a quick takedown as they restart. Just a minute to go now. Sage lands a few quick elbows, gets to mount, looking for the arm triangle. Sage now goes for the back, then lands several punches before the bell. 10-9 Northcutt.

Round 2 – Sage takes Cody down early in the round. Sage locks up a guillotine choke and Cody taps out. Good stuff. But that standup in the first round was whack!

Round 1 – Counter left from Miller. Right jab. Body shot. Chiesa with a body lock takedown, now in half guard. Miller tries to explode out but pays for it with a few elbows and Chiesa continues to control from top. Miller goes for a kneebar and uses it to sweep. Scramble and Miller takes Chiesa’s back. Some beautiful grappling going on here. Miller locks up a body triangle and searches for the RNC. Chiesa trying to control the wrists. And he survives the round relatively unscathed, but Miller should take the round 10-9.

Round 2 – Chiesa with a single leg takedown early in. Miller goes for another kneebar. Chiesa defends and then hurts Miller with punches and opens him up. Chiesa hops to mount. Miller gives up his back and Chiesa lays on the choke and Miller taps out. Impressive.

Round 1 – Rose looks much more serious. Nice right from Rose. She catches Paige again and again, then takes Paige down and working from inside guard. Rose drops some elbows hard on Paige’s face, but she explodes to her feet. Paige is cut and bleeding. Paige getting serious now. Eats a big right. Tries to fire back but no one is there. Right from Rose. Nice jab. Her striking is looking really good. Props to Trevor Wittman. Rose with a takedown, then takes Paige’s back. Paige gets wrist control then back to her feet. Paige’s face is a bloody mess. Rose takes her back down. She stands up and dives in with punches. Rose on top in half guard and dropping all kinds of damage as the round ends. 10-8 for Rose.

Round 2 – Paige walks into a punch combo, they tie up against the cage and Rose reverses a takedown attempt and is on top. Rose takes her back. Paige scrambles and Rose ends up on top in half guard. Rose stands up, dives in with a right, and is back in half guard. Paige gives up her back and gets to her feet. Rose clinches her up against the cage. Paige gets a headlock takedown but gets reversed immediately. Paige gives up her back. She gets to her feet and exchange in the clinch. Paige looks for a takedown but ends up on her back. Rose working her over at the bell. 10-9 Rose.

Round 3 – Rose with an early takedown and is back on top in half guard. Paige gets back to her feet and is being aggressive now, but walks into some hard shots. Rose ties her up, backs out, front kick. Hard leg kick from Rose. Overhand right. High kick. Stiff left. Paige clinches up, lands a couple shots. Rose with the takedown and is in half guard. Rose opens that cut back up with punches. Couple short elbows. Paige gets to her feet and Rose jumps on her back like a monkey, sinking in the RNC, Paige jumps in the air and onto her back slamming Rose on her back. This breaks the choke and they’re back up before the bell. Paige a bloody mess. 10-8 Rose.

Round 4 – Rose with her sixth takedown of the fight. Rose sets up an armbar, stretches it out. Paige escapes, looking for a single. Rose drops a couple elbows to the side of her head. Riding Paige’s back now. Back to the feet, Rose gets another takedown. She jumps on another armbar. Somehow Paige escapes twice! Now Rose locks on an omoplata, lets it go. Rose jumps on her back now. Paige stands but Rose is still holding on. Rose backs out. Front kick. Another takedown from the clinch for Rose. Domination. 10-8 Rose.

Round 5 – Rose with a one two, then a body lock takedown. Rose rides her heavy from top, now in half guard. Rose on Paige’s back again as she stands. Paige flops back again, but this time the choke is too tight and she has to tap. That was a one-sided spanking. Rose looked MUCH improved. She was flowing on the ground, riding Paige like a surfboard on a wave. Her stand-up was great technique, sharp crisp strikes. Her mental game looked on point. Lookout for Rose Namajunas. And I have to admit I called this fight wrong. I f*cked up! I thought Paige would take it but I underestimated Rose’s progression and probably over-estimated Paige’s.

He needed the finish AND HE GOT IT!!!! @SerginhoMMA #UFCVegas https://t.co/NDxA7h80lh