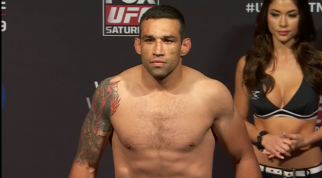 UFC President Dana White confirmed the news today that UFC heavyweight champion Fabricio Werdum (20-5-1) will defend his title against Cain Velasquez (13-2) at UFC 196. The two fought one another in their last fights at UFC 188 in May, with Werdum submitting Velasquez in the third round to become the new heavyweight champion.

UFC 196 is expected to take place in Las Vegas at the MGM Grand Garden Arena on February 6th. The first fight caused a lot of questions to arise after Werdum became the champion. Velasquez was coming off a long layoff and the fight took place at Mexico City which features higher elevation than normal. It should be noted that Werdum had to fight in the same elevation, but spent much of training camp there getting accustomed to it.

Stay tuned to ProMMAnow.com for more UFC 196 news and coverage.