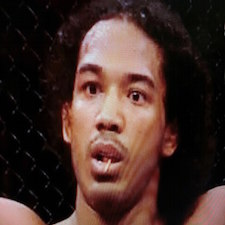 Former UFC lightweight champ Benson Henderson is up to his old toothpick tricks again. The 32-year-old MMA Lab product has a bad habit of keeping a toothpick in his mouth during fights. There are those who say it’s an old boxing trick that helps a fighter keep their mouth closed, thus making it harder to get knocked out. Whatever the reason he does it, it’s not good, and under the right circumstances it could puncture his lip or cheek or get lodged in his throat during a fight. What’s crazy is after all this time he’s still getting away with it and he’s not being thoroughly inspected before entering the Octagon. Henderson edged out a split decision over Jorge Masvidal in the UFC Fight Night 79 headliner over the weekend. Now watch as Masvidal touches Bendo up just enough to cause him to want to spit the toothpick out during the third round.

Currently Bendo is a free agent, so we don’t know when to expect him back in the cage or where for that matter. But wherever it is, will someone please inspect his mouth thoroughly before he fights next time.