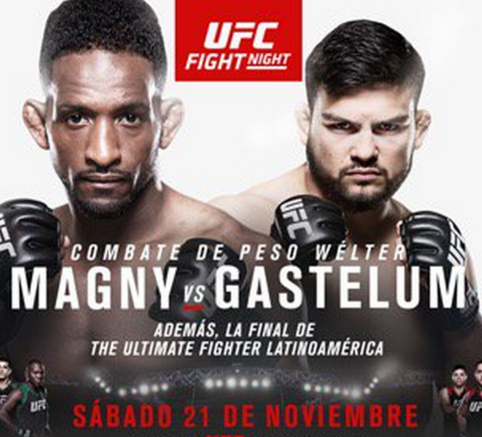 Neil Magny fills in for an injured Matt Brown to take on TUF 17 winner Kelvin Gastelum in the main event as he tries his hand at welterweight once again. Diego Sanchez is poised to help boost number four ranked featherweight Ricardo Lamas’ star power in the co-headliner.

NOTES: Referee let Scott Jorgensen fight against Alejandro Perez go on way too long. Jorgensen’s leg/ankle was messed up badly so he could hardly put weight on it without it buckling and Perez just kept smashing it with kicks. Jorgensen was basically unable to defend himself but showed amazing heart staying in there. He wasn’t going to give up so that’s when the ref needs to intervene. Instead, it went on several minutes too long and Jorgensen took a lot of unnecessary punishment.

This referee is messing up badly by letting this continue #UFCMonterrey Jorgensen can't stand. He's falling with no contact

Round 1 – Barzola with a big takedown, looking for Gutierrez’s back. Gutierrez gets back to this feet, but Barzola puts him right back down. Repeat. Barzola with elbows and punches from the top from inside guard. 10-9 Barzola.

Round 2 – Barzola with a takedown and back to the ground and pound. Gutierrez is cut up and bleeding now as Barzola continues the paced assault. This continues for the remainder of the round. 10-9 Barzola.

Round 3 – Gutierrez defending the takedown attempts so far this round. But Barzola is persistent and puts him on his back. Barzola goes back to landing elbows and punches while inside full guard. 90 seconds to go. And there it stays. 10-9 Barzola.

Round 1 – Montano looking more fluid in the standup, landing punches and kicks. Marin keeping on the pressure, lands a nice one two… takedown from Montano but gets swept by Marin. 10-9 Montano.

Round 2 – They trade punches before Marin scores a takedown. Scramble, but Marin remains on top. Back to the feet. Marin looks fresher at the moment. Marin pressing with low kicks and jabs. Lots of kick attempts from Montano. 10-9 Marin.

Round 3 – Clinch and they exchange knees. Repeat. Big slam from Cejudo but Formiga is right back up and they square up. Clinch, knees from Cejudo. Low kick from Formiga. Clinch, Cejudo presses him to the cage. Clinch, knees. Cejudo puts him against the cage until the bell. Some boos, a few cheers. 10-9 Cejudo… Cejudo vs. Mighty Mouse is going to be good one day.

Some might suggest one judge had a bet on this fight on Formiga. BULLSHIT score whoever scored that for Formiga.

Round 1 – Lamas comes out with high and low kicks as Diego pressures. Right hook from Sanchez. High kick from Lamas is checked. Jab from Lamas. Punch combo from Sanchez. Wheel kick from Lamas, he lands it and tries to capitalize. Diego a bit stunned but stuns Lamas, still pressing, nice body kick. Lamas can’t get in too much of a hurry here. Takedown from Lamas slows the constant pressure. Lamas puts some knees to the body as Diego gets to his feet. Knees to the thighs now. Lamas trying to drag him back down. The exchange a few punches before the bell. 10-9 Lamas.

Round 2 – Low kick from Lamas. Nice straight left from Diego. Lamas shoots in, takes a couple elbows to the side of the head. Diego bleeding now from those elbows. Lamas looking for the takedown against the cage. Diego defending well, but Lamas is controlling the action. Low kick to the ankle, another and it has damaged Diego’s leg badly, he can’t even walk but he puts his back to the cage and calls Lamas on. Lamas tags him. He calls him on again. Lamas goes for the takedown but Diego hits the switch and ends up on top with about 1:40 to go. Lamas gets a reversal and is riding Diego’s back. Diego hits the switch once again, determined to outwrestle Lamas. Great scramble but Lamas ends up on Diego’s back for a moment. Another low kick to the ankle and a couple punches from Lamas. Diego survives. Wow. 10-9 Lamas.

Round 3 – Lamas now looking to go high with that kick. Nice shot from Diego. Lamas goes for the ankle kick but Diego sees it coming. Nice timed knee from Diego catches Lamas coming in. Lamas falls on a wheel kick. Back up. another low kick from Lamas puts Diego down, he’s back up, puts his back to the cage and calls Lamas on again. This guy is amazing. A reminder why we love him. He can’t even walk right now but he’s defending a takedown against the cage from Lamas. spinning backfist from Lamas opens a cut. Lamas slips to the ground on another spinning shot but is right back up. They square up. Diego bloody as always. High kick from Lamas. Uppercut. Right from Diego. High kick from Lamas is checked. Diego moving okay now. He’s still pressing, misses a spin kick of his own. Lamas looking for a highlight reel KO. Diego hears the 10 second mark and goes to attack but Lamas ties him up. Diego is smiling, happy, wants to hug Lamas. Lamas looks much more serious. 10-9 Lamas.

Round 1 – Magny gets to full mount and takes Gastelum’s back with about 1:30 to go. Back to mount, Gastelum gives up his back. Now takes half guard on top with under a minute to go. Magny threatens with a kimura, Gastelum back to the feet. Right hook from Kelvin. 10-9 Magny.

Round 2 – Straight right from Magny and he’s out of the way before Gastelum can attack. Magny using his jab well, high kick from Gastelum as he backs Magny to the cage, now clinches up looking for the takedown. They turn each other around then it’s back to the center. Magny with the jab. Big body kick from Kelvin but Magny touches him up with a one two three punch combo. Big leg kick from Kelvin. Gastelum backs him to the cage with punches, but Magny covers up and backs Kelvin up with more shots, snapping his head back. Takedown from Magny, Gastelum scrambles to his feet but Magny takes him back down. Back up. Clinched, Magny controlling and puts him back down and takes Kelvin’s back. Gastelum gets up before the bell but Magny controls him in the clinch. 10-9 Magny.

Round 3 – Gastelum comes out aggressive. Magny touches him up with jabs. Stuffs a takedown attempt, then lands a big right. Magny with a takedown but Kelvin is right back up. Counter right hook from Kelvin, and a low kick. Nice left hook as he backs Magny to the cage. They wrestle in the clinch for a bit before Magny gets a takedown but Kelvin is right up again. Magny shoots in, Kelvin stuffs it and gets to his back briefly. Magny with a takedown, Kelvin rolls him for a reversal before the bell and ends the round on top. 10-9 for Kelvin, I guess.

Round 4 — Nice punch combo from Magny. Kelvin ends up dropping Magny with a big right. Kelvin pounces and takes side mount, gets a crucifix position and drops some shots. Magny scrambles to his feet but Kelvin drops him with a left and pounces again. Kelvin has him clinched as they get to their feet. Magny threatening with a standing kimura and gets some distance. Kelvin hunting him down. Low kick. 10-8 Gastelum.

Round 5 – Kelvin pursuing again. Magny stuns Kelvin with a couple punches but Kelvin puts him down with a takedown. Gastelum controls from inside full guard. Magny threatens with a triangle and that gets him to his feet. Uppercuts inside from Magny, touching Kelvin up against the cage. Kelvin putting on the pressure with punch combos. Backs Magny to the cage. Low kick from Gastelum. Gastelum  landing punches, big body kick, again. Right straight from Magny snaps Kelvin’s head back. Jab. Jab. Magny drags Gastelum down both hooks in, but Gastelum spins and has top control now. He postures up with some ground and pound as he gets to half guard. 10-9 Gastelum.