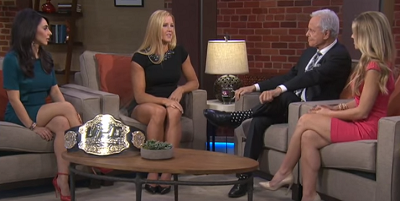 Newly crowned UFC women’s bantamweight champion Holly Holm now has her first taste of doing promotion as champion. Holm appeared on several outlets Monday to talk about her historic win over Ronda Rousey on Saturday night at UFC 193. Holm commented on the journey thus far via her Instagram account:

“What a crazy busy beautiful day! Still trying to take it all in. Busy day for the champ.”

Below is footage of Holm appearing on the Good Morning Los Angeles show in which Rousey has appeared on several times in the past: