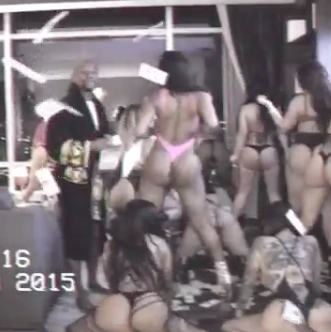 “Mr. My Life is the Sh*t” Floyd “Money” Mayweather was up until the wee hours of the morning partying with his lady friends as they twerked in thongs and he rained down bills. After all, what else are you going to do when you’re the highest paid athlete of all time, you’re single and you just retired?

What if this was all an act, and those were really Floyd’s aunties and cousin, and the maid and her sister, and he’s just trolling everyone, and after they shut the camera down, they’re like all really into Jenga or something? That would be much more interesting actually. But when you’ve got that much money to burn, watching another rerun of Cops probably seems pointless. Might as well call a Twerk troop over for a nightcap.

Just a normal house party at 5:16am for Mr. My Life is the Sh*t (via @camcorderapp) Music by: @liljamez Film credit: @jpconnected www.themoneyteam.com

1 thought on “So Floyd Mayweather had a good night…”