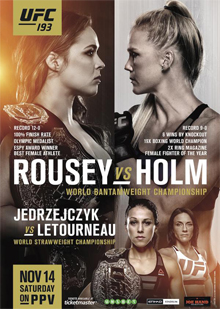 The UFC 193 PPV event is set to take place on Saturday, November 14, at the Etihad Stadium in Melbourne, Australia. The event will be headlined by two women’s title fights. UFC women’s bantamweight champion Ronda Rousey will put his title on the line against former boxing champion Holly Holm. UFC women’s strawweight champion Joanna Jedrzejczyk will put her title on the line against Valerie Letourneau.

The event is expected to have close to 70,000 fans in attendance which would set the all time UFC attendance record. Australia’s Mark Hunt will also be on the card as he locks horns in a rematch against Antonio “Bigfoot” Silva. Their first fight in 2013 ended in a majority draw and was one of the most exciting heavyweight fights of all time.

Stay tuned to ProMMAnow.com for more UFC 193 news and coverage.